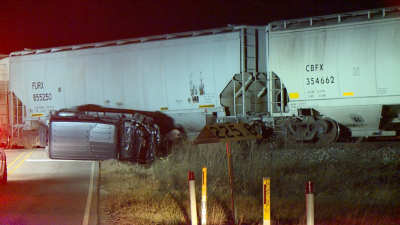 (BROWNSBURG) – One person is dead and another injured after two vehicles collided with a train in Brownsburg.

The Hendrick County Sheriff’s Department reports a car was hit by a train near the 6900 block of North County Road 900 East.

When officers arrived they found the car sideways in the road and one person injured.

While emergency crews were at that scene they received a second report that an SUV crashed into the same train in the 8800 block of East County Road 700 North.

Police say the SUV struck the train while it was stopped, and one person was pronounced dead on the scene as a result of the crash.

The train tracks do not have crossing arms only a stop sign before the tracks.

Additional information about the crash and those involved has not been released.

The crashes remain under investigation.