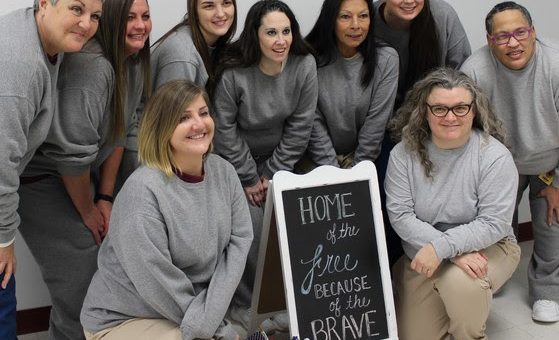 (ROCKVILLE) – Maya Angelou was right when she said, “How important it is for us to recognize and celebrate our heroes and she-roes!” Those “she-roes” can be found all across our great nation, including behind prison bars. So on November 13, 2019 the Rockville Correctional Facility (RCF) recognized that special group of offenders at a luncheon held in their honor.

The group of nine women currently serving sentences at RCF were recognized for their military service and represented every branch of the U.S. military. The event, organized by RCF Transition coordinator, Mrs. Kristen Selvia-Butler, is part of the national Incarcerated Veterans Program (IVP). The IVP provides veterans with opportunities, services and information relating to their military service and the benefits that they may be eligible for from the U.S. Department of Veteran Affairs upon their release.  The program also encourages those eligible to come together and participate in activities provided to cultivate a sense of camaraderie and positive fellowship.

Former U.S. Army veteran and current RCF Sergeant Travis Williams was a guest speaker. Sgt. Williams compared incarceration to boot camp – being one more hurdle to overcome – and how the military values learned there can be applied to turning their lives around. Values such as courage, determination and integrity can be key to making a successful re-entry into society after incarceration.

Several of the women shared their motivation for enlisting in the military. Lori Smith, an eight year veteran of USMC, said her enlistment came as a challenge from her then-husband, but she quickly learned she was good at it – thriving in the structure of military life. This single-mother had the opportunity to give her four sons a global up-bringing that would not have been possible without her choice to enlist. U.S. Navy veteran, Kyla Kinslow, said her life had no direction at the time of her enlistment. But thanks to a recruiter who was aware of her situation and suggested the Navy as a compass for her life.

Mrs. Selvia-Butler stated, “RCF is pleased to take the opportunity to honor this group of women and to remind them no matter their current situation they will always and forever be veterans of the U.S. military.”

Food for the luncheon was prepared by Aramark staff and offender graduates of the Department of Labor IN2WORK program.