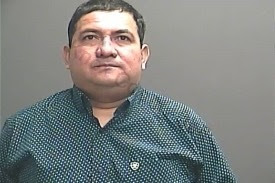 (KNOX CO.) – On Thursday at 9:23 p.m., Indiana State Police and Vincennes Police responded to a two-vehicle crash at Washington Avenue and Carbon Street.

Officers on scene determined that 45-year-old Housman R. Paz, of Vincennes, was driving his 2005 Buick without the vehicle’s headlights on and rear-ended another vehicle.

Paz’s 10-year-old son was in the back seat of the vehicle.

Paz displayed signs of impairment and further investigation revealed he had a blood alcohol content of 0.25 percent.

The juvenile was released to his mother.

Paz was arrested on a felony charge of driving while intoxicated with a passenger under the age of 18. He is currently being held on bond in the Knox County Jail.