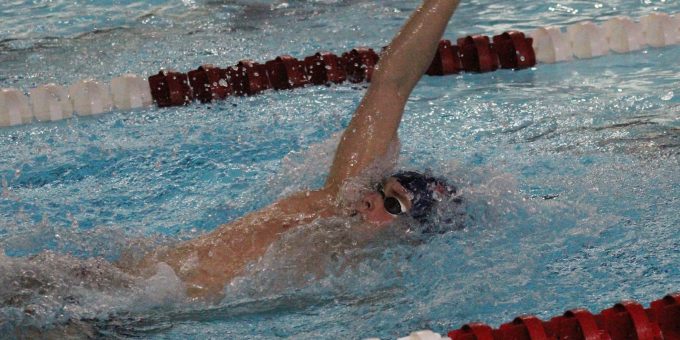 (BEDFORD) – Floyd Central splashed and dashed to impressive victories over Bedford North Lawrence during a double-dual meet on Saturday.

“I wasn’t real happy with the result today,” BNL coach Terry Tlustek said. “I knew our girls were going to have it rough, but I thought our guys would make more of a fight. They did not do bad, it just was not enough to get over the hump.”

Ursula Patton was the lone winner for the BNL girls as she claimed the 100-yard freestyle in 58.07 seconds.

“I was really happy with Ursula’s 100 free,” Tlustek said. “She fought hard and did really well with her turns and breakouts, and she earned the win in that race.”

“Although she did not win, I was really happy with Shelby Slaughter’s 500 free,“ Tlustek said. “She dropped 7 seconds (second in 5:53.03) and is showing some real improvement. I was also happy with Shay Summers in her 100 back (second in 1:10.48). She keeps inching up every time she swims.”

The Stars also took the 200 free relay as John Allen, Adam Tlustek, Garrett Henson and Sorrells combined to clock in at 1:37.58.

“After looking at the results, I was very pleased with some of the gains we made,” Tlustek said. “I was really pleased with the two relays we won.  I knew it would be a fight for the medley relay but they pulled it out. I was very happy with the 200 free relay the two middle legs of that race with Adam and Garrett really kept that race competitive and Dayson just sealed the deal.

“I was really happy with John Allen’s 50 free (second in 23.34). He is making really good strides in that race. I was really happy with Jacob’s 100 free.  It was really close to a :47 and that is a great place to be right now. He just has such fight and awareness during his races that gives him such an edge. Garrett did great in his 100 breaststroke, he had an all time PR by about a second.  Those are the kids we need to come on strong right now.”