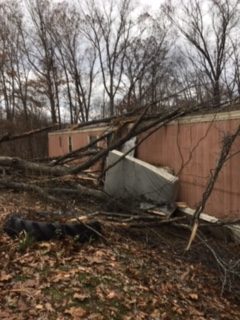 (HELTONVILLE) – The Pleasant Run Twp. Volunteer Fire Department responded to 637 Ramsey Ridge Road around 12:30 p.m. today after a report of a tree falling on a mobile home.

Penny Clark and her son Corey were inside when the tree came down on the home. The tree struck the top of Corey’s head when it came crashing down.

Corey who is autistic was taken by his caretaker to the emergency room to be checked out. Penny was not injured.

Penny Clark has been struggling over the last several years trying to make repairs to the trailer which has bad flooring.

Penny said she is worried.

“This has come at an inconvenient time, with Thanksgiving tomorrow. I just do not know what I am going to do,” she added with tears streaming down her face “What is next?”

The mobile home is not insured, and Penny has tried previously to get help from various agencies but has not been successful.

Firefighters could smell the odor of gas when they arrived on the scene so they donned air-paks to retrieve Penny’s dog and a few personal items in the home that she would need.

Power lines were also knocked down and REMC was called to disconnect the power.

Firefighters contacted the American Red Cross to get Penny and her son immediate assistance and a place to stay for this evening.

This morning strong winds have knocked out power throughout Southern Indiana, Lawrence County Fire Departments and Lawrence County Highway crews have been busy responding to several calls of downed trees and powerlines.