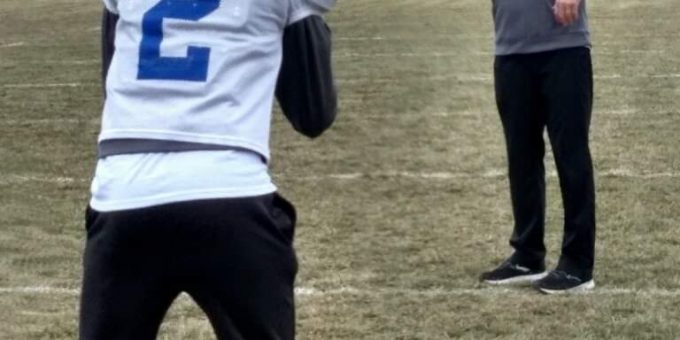 (CAMPBELLSBURG) – West Washington Head Varsity Football Coach Phillip Bowsman passed away Monday afternoon after complications related to a stroke he suffered during a game on Friday.

Bowsman suffered a stroke due to a blood clot while coaching the semi-state game against Indianapolis Lutheran.

Bowsman underwent brain surgery on Friday evening to relieve pressure due to swelling.

Bowsman worked for the West Washington School Corporation for 19 years. He began his career as a health/physical education teacher and served as an assistant coach for several sports.

Bowsman then became the head varsity football coach and held that position for 16 years. He served as athletic director for seven years.

In a statement from West Washington School Corporation they said, “In true Coach Bowsman fashion, he made his final act of giving by being an organ donor.”

Bowman died at 1:19 p.m. Monday after he was removed from the ventilator which allowed him to die peacefully.

There will be an honor walk at St. Vincent Hospital Indianapolis on 86th Street on Wednesday, November 27th.

Many school corporations around Southern Indiana held prayers services in their high school gymnasiums for the family, friends, and students of Mr. Bowsman.

Funeral arrangements include a visitation on Friday, November 29th at Mt. Tabor Church from 11:00 a.m. until 8:00 p.m. Funeral service will be held on Saturday, November 30th, at noon at Mt. Tabor Christian Church. Visitation will take place from 10 a.m. until time of the service. Per the request of the family, they ask everyone to wear their Senator attire both Friday and Saturday.

The family respectfully asks that you not buy flowers, blankets, or other items but instead make a donation in honor of Phillip to the West Washington Athletic Department. Donations can be dropped off at the First Harrison Bank in Salem. Simply visit the branch and make a donation to the Bowsman Family Fund.

As the community grieves there are counseling services available through the school. Anyone in need can contact the office at 812-755-4872.

“A makeshift memorial is at the Senator Football Field, where Coach Bowsman stood proudly on Friday nights as leader of our young men. Feel free to stop by, leave notes, pictures, mementos, candles, etc. The lights will remain on and you can visit on your own time. Please take time to show, love and support for all members of our community. His impact was great, this loss will affect many,” said the West Washington School Corporation.

Both Lafayette Central Catholic and Indianapolis Lutheran, who are facing off for the Class A state championship game this week, will be wearing special stickers on their helmets in support of the Bowsman family and the West Washington community.