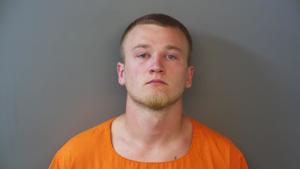 (SCOTTSVILLE, KY.) – A Jamestown, Indiana man has been indicted in an Allen County Kentucky murder case.

Lucas and 20-year-old Sevonte Sumpter-Bey, of Brownsburg, Indiana and a 17-year-old Jonathan Johnson, are accused of killing 47-year-old Justin Wix whose body was found May 7 outside the camper where he lived at 151 Stinson Lane in Scottsville, near the Tennessee state line.

Wix died from multiple gunshot wounds. Police say Wix was wounded by three bullets, one striking him in the buttocks and passing through both thighs, another entering his back and a third entering his front below his rib cage.

Sumpter-Bey and Wiles are incarcerated in Indiana for unrelated offenses, while Lucas is in Allen County Detention Center in Scottsville, KY. under a $1 million cash bond.

According to court records, Lucas “basically the organizer” of the robbery plot and recruited Sumpter-Bey and Wiles to rob Wix.

The case was at a standstill until June 9th when a juvenile from Indiana contacted Kentucky State Police claiming to have information about Wix’s murder.

Johnson and another detective traveled to Indiana to speak with the juvenile, who claimed to have overheard Lucas, Sumpter-Bey and Wiles boast of their involvement in the homicide.

Wiles and Lucas refused to speak to the police and requested an attorney. But Sumpter-Bey placed himself, Lucas and Wiles at the scene and admitted to his part in the murder.

He told police Lucas had traveled to Wix’s house previously and saw that Wix had a substantial amount of money and drugs.

Sumpter-Bey detailed to police that he dropped a knife as he kicked open the door to Wix’s camper and did not realize it until he had left the scene.

Sumpter-Bey told police he and Wiles forced their way into the camper, while Wix exited through another door and saw Lucas, Johnson said. Wix pulled a gun and fired it.

Police seized about an ounce of meth from Wix’s residence. The gun used to shoot Wix and Wix’s gun was thrown in a creek in Indiana.

Wix’s body was found by a man who had previously arranged to trade vehicles with him. That person contacted a relative of Wix’s, and his ex-wife called 911 after going to the property and seeing the body.

Lucas was charged initially with murder and first-degree robbery at the time of his arrest. The grand jury added the charges of burglary and tampering with a crime scene.