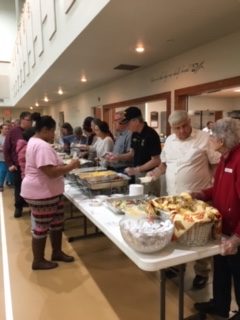 The normal Thanksgiving fixings were available – turkey, ham, mash potatoes, green beans, yams, macaroni and cheese, dressing, and cranberry sauce. The meal was served with drinks of tea and lemonade and a dessert to satisfy the sweet tooth.

During this year’s meal, a moment of silence was given for their volunteer Mother Sandy Young who passed away in October. Thanksgiving baskets and Lego were given away and Hilltop Pentecostal Church had a coat giveaway.

On average, Bertha’s Mission serves between 60 to 100 free meals on Tuesday, Wednesday, and Thursday. In addition, on Wednesdays the mission delivers at least 130 meals to the elderly and disadvantaged.

Bertha’s Mission opened on September 17, 2013 and was an immediate success, serving 50 to 60 meals a day. Bertha’s Mission expanded to serve Mitchell residents in 2014 by opening up a second location there which closed in 2017.