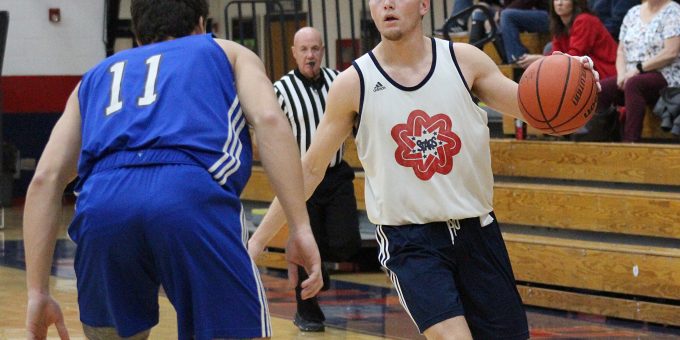 (BEDFORD) – Seven months after Bedford North Lawrence basketball shifted course, the new era will officially begin. Welcome back Jeff Hein, three years after his last game as a head coach, now the ninth man in program history to take the reins and steer the Stars toward success.

BNL, with so many new pieces, will start the 2019-20 campaign on Tuesday night at Bloomington North. The turnover wasn’t limited to the staff, with a starting lineup featuring four newcomers with very limited varsity experience. It’s going to be an interesting season.

What’s BNL going to be like? That question was asked hundreds of time during the summer. Hein stressed a return to defense and fundamentals as a solid base. The Stars gave some glimpses during June camps and the recent scrimmages that did not go smoothly, but those didn’t count. From now on, it does.

Know this: whatever direction BNL takes, whatever identity it forms, senior guard Brayton Bailey will play a major role.

Bailey is the known factor. He led the Stars in scoring (18.9), rebounds (6.7) and assists last season, and he starts his final year as one of nine players in program history to score over 1.000 career points. Starting at 1,054, with another season similar to his junior year, he could end up second on the school list. He might have to. The other four projected starters combined for 86 points last year.

“The mark of a good player is someone who gets everyone around him involved and makes them better,” Hein said. “Brayton is a kid that can do that. He doesn’t have to score to be a good player, but it’s beneficial when he does. He’s got a whole new crew, but in time he’ll make those kids better basketball players.”

The new crew will include senior Trey Mollet (2.7), junior Kooper Staley (1.2), junior Ben Cosner and senior Zach Sasser. Their individual talents (Mollet and Staley are dangerous streak shooters, Cosner has fluid athletic ability, Sasser has bulk in the middle) will have to combine quickly and seamlessly. The role players off the bench could include two freshmen.

“We’re a work in progress, we have a lot of things to continue to work on, try to get better,” Hein said. “I don’t know how long it will take, hopefully sooner than later. But it will take a little bit to get in sync and get everyone on the same page.”

The Cougars don’t have that issue. Former BNL standout Jason Speer, now in his second year at North, has four veterans, including leading scorer Isaac Vencel (13.8) and senior Tim Brewster (10.5), from a team that went 13-8 last year but finished with a disappointing five-game losing streak.

“We’re mixing in some guys with them that adds a lot of things for us,” said Speer, whose club wrapped up its preseason with a scrimmage against Loogootee. “I think our team speed is really good. We’ve been able to turn the corner where we have guys that are veterans, guys that are newcomers, and they’re competing for playing time.”

North was victorious in last year’s clash at BNL 49-45, although BNL lost it more than North won it by missing a whopping 18 free throws. Brewster came off the bench to score 15 for the Cougars, including the go-ahead 3-pointer with 1:11 left.

Bailey had 17 points for the Stars. He will definitely be mentioned first on the scouting report.

“He’s a phenomenal guard,” Speer said. “He’s hard for a point guard to guard at our level because he’s so much stronger, and he has fantastic vision. He takes advantage of situations, he’s just a high IQ kid.”

BNL has won its last two trips to North, but those were with experienced clubs.

“North is an experienced team and has a lot of their personnel back,” Hein said. “It’s going to be a tough test on the road, first game of the year. Our kids are ready to play a real game.”

Last meeting: Last year at BNL, the Stars missed 18 free throws, allowing the Cougars to escape with a 49-45 victory. Tim Brewster scored 15 points for North, while Brayton Bailey had 21 for BNL.