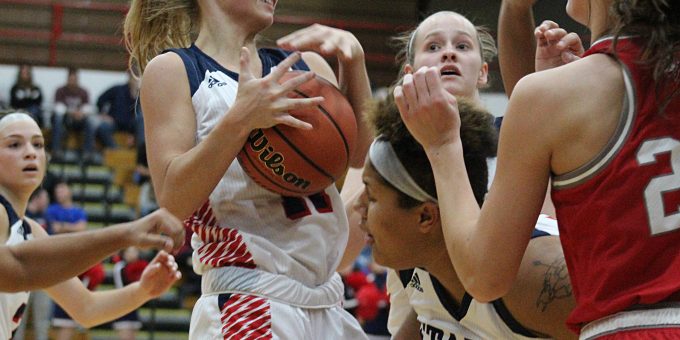 BEDFORD – The funeral pyre was lit, and Jeffersonville was burning as Bedford North Lawrence threatened to chase its main Hoosier Hills Conference rival back to the Ohio River.

Down 18 points, the Red Devils were almost – almost the key word – dead. But as Miracle Max pointed out, there’s a big difference between mostly dead and all dead.

The Devils arose, like a phoenix from ashes, like a zombie from the ground. Pressuring the anxious Stars into critical mistakes, No.8 Jeffersonville rallied for an incredible 56-53 victory over No.12 BNL on Saturday night, an outcome that will shape the remainder of the HHC race.

A miracle? No. Pressing, dogged defense is not a supernatural phenomenon. It’s sweat equity, pride, determination. The Devils displayed all of that as BNL’s huge lead vanished, a comeback that ranks among the best in Mike Warren’s seven seasons as Jeff coach.

“It’s up there, probably about as special as I’ve had,” Warren said. “It’s just a tough place to play, but the kids just found way. We faced adversity for the first time, so for the kids to find a way to grind it out, it was fun to watch.”

BNL (3-3) was about a basket away from a blowout march. Madison Webb’s post layup gave the Stars a 37-19 lead two minutes into the third quarter. That’s when Warren, after freshman Tatum McFarland drilled a trey, called a timeout and ordered a full-court attack. For the second straight night, the Stars struggled.

The Stars had only one basket during the next eight minutes, and Jeffersonville (6-1) sensed the weakness during a remarkable 23-3 run to a 44-40 lead. Despite the wheels-off wobbling, BNL regained its composure and took a 51-48 lead on Karsyn Norman’s wing trey with 2:43 left, and went in front again 53-51 on Webb’s post layup. BNL wouldn’t score the final two minutes.

The key play was a missed layup, followed by Alexis Gibson’s breakout to a three-point play with 59 seconds remaining. That was the last basket. Both teams had chances to change the outcome – the Stars missed two hurried treys around Jeff’s missed free throws – but the final result was a devastating Jeff win.

“We easily could have folded,” Warren said. “We haven’t been down 18 with this group. You don’t know what going to happen when you’re down 18. We just turned the pressure up, we got after them, they got a little shook, we hit big shots, and we just found a way.

“The kids just turned It up, Obviously the press was the big difference in the game, but it was just the willingness to put yourself out there and lay it on the line. I’ll go down with kids like that.”

How did BNL get that far in front? With its best 18 minutes of the season. Webb was an early force inside, and Chloe McKnight erupted to hit three straight 3-pointers during a second-quarter surge. Jenna Louden’s knifing layup gave BNL a 30-18 lead at the half, and Irye Gomez started the third with a corner trey and a layup off a steal.

Jeff staggered. Stumbled. Probably needed an eight count. Then got off the canvas.

“I’ll take the blame for that,” BNL coach Jeff Allen said. “We had a lead last night (at North Central) and gave it up. We have to go back and work on handling pressure. We have kids that every game, they grow in experience. Hopefully by the end of January, we’ll be able to handle that pressure.

“But that was the difference in the ballgame. Congratulations to them, that was a great comeback. They started making shots and turning us over, and we can’t do that against good basketball teams.

“That’s part of the inexperience. They’re not going to go away, and my kids have to learn that.”

While Garcia, a Penn State recruit, was often swallowed by triple-team annoyance, James was huge. She hit four treys, Gibson added 11 points, and McFarland was fearless while totaling 8.

Webb finished with 19 points, Gomez totaled 13, and McKnight had 11.

BNL will have to squirm about this for a while, with the next outing at home against Zionsville on Nov. 30.