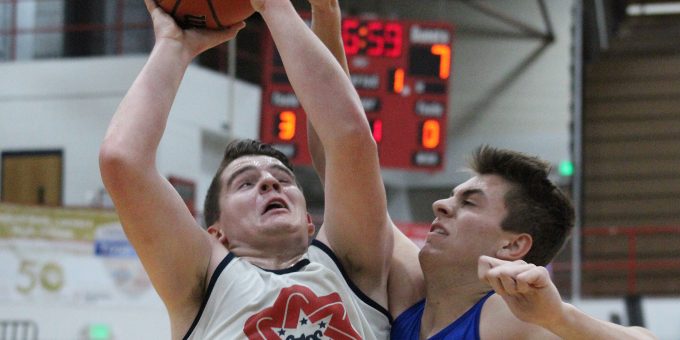 (BEDFORD) – The bulk of Bedford North Lawrence’s roster – and bulk is not the best descriptive term for this undersized team that lacks it – got their first taste of varsity speed and power. It did not go down well.

The Stars finished their public preseason workouts for the 2019-20 campaign in Thursday night’s IHSAA-sanctioned scrimmage with Columbus North, and the Bull Dogs flexed some muscle during a dominating performance.

North, a veteran unit with the top three scorers back from last year’s 16-8 season, ‘won’ the first two quarters (played with a 12-minute running clock and predetermined defensive structure) by a combined total of 38-14. BNL, playing two freshmen considerable minutes in the final two quarters, was much more competitive after the break.

The Stars battled to a 10-10 deadlock in the third, then dropped a 19-16 decision in the fourth. That was a 67-40 total, although the final half of the session was certainly more noteworthy from the BNL perspective. Lessons were learned, future playing time might have been earned.

“We’re going to grow, we’ll get better and figure some things out,” BNL first-year coach Jeff Hein said. “We needed this, we needed to see that level of competition.

“Some of these kids, we only have one true varsity kid on the floor right now. You don’t know what it’s like until you experience it, and they experienced it tonight against a good team.”

Welcome to the big time.

The Bull Dogs were big-time tough, sand-kicking bullies against the playground kids, in the opening two quarters, blasting to a 20-7 advantage after the first and shooting out to an 18-7 edge in the second. The Stars were turnover prone and misfiring, a bad combination, while absorbing that punishment.

“We just got outmanned,” Hein said. “They were a lot stronger, a lot bigger than us, and they took it to us early with their quickness and athleticism, their size. They got us sped up.

“We missed shots because we were trying to shot shots before we had the basketball in our hands. We weren’t ready to catch and shoot it. We talk about playing game speed in practice, but until you get against a varsity opponent, it’s not going to happen. We have to get used to playing at a faster speed.”

BNL’s best time frame was the third quarter, as Ben Cosner converted a 3-point play and drained a 3-pointer. Zach Sasser worked free for a layup off Brayton Bailey’s patented baseline drive and dish. But the noticeable change was the insertion of fearless rookies Colton Staggs and Colten Leach into the lineup. Leach was especially impressive and scored twice in the second half.

Kooper Staley buried two jumpers and Bailey popped a trey in the fourth.

Cosner and Staley both had 8 for BNL. Bailey played with a splint on the middle finger of his left (non-shooting hand), an injury suffered in the intrasquad scrimmage on Monday.

“We got better in the second half,” Hein said. “Maybe this will help us when we go to Bloomington North. We’ll take some of the positives in the long run.”

BNL, with many questions still to answer, will open the season at Bloomington North on Tuesday.