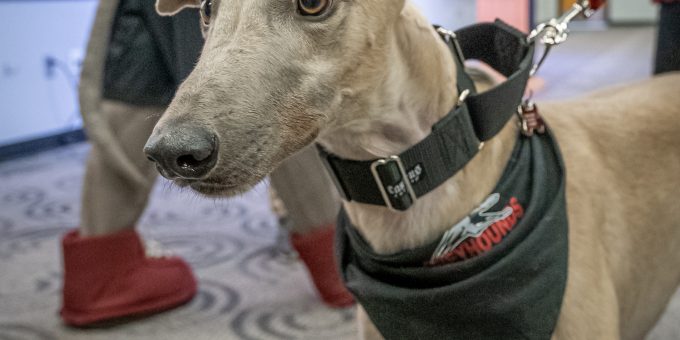 (INDIANAPOLIS) —The University of Indianapolis introduced its new live mascot, Grady the Greyhound, at a news conference Wednesday. Grady, a two-year-old retired racer adopted from Florida, joined UIndy in November to begin his second career as the University mascot. He joins Ace the mascot to increase spirit and pride throughout the entire University community.

Grady’s debut marks the first time in nearly 40 years since the last live mascot, “Timothy O’Toole,” proudly represented UIndy (then known as Indiana Central University). Grady’s full name is C. Greyson Veritas, a nod to the school colors of crimson and grey, and the Latin word for “truth,” which formed part of the University seal when it was known as Indiana Central College (as part of the saying, “Truth through faith and science.”)