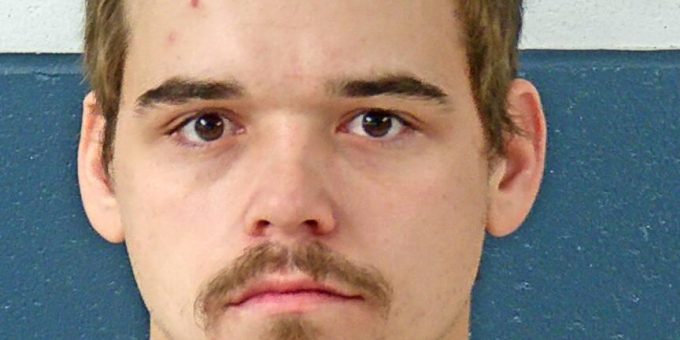 (BEDFORD) – A Bedford man was arrested on a warrant Thursday night on a charge of cruelty to an animal and harboring non-immunized dogs.

According to a probable cause affidavit filed by Lawrence County Animal Control Officer Lola Nicholson, Jackson is accused of abandoning and neglecting an animal and harboring non-immunized dogs.

On Nov. 4, Lawrence County Sheriff’s Department received a call about a dog tied up with no shelter or food or water in the 280 block of Tresler Road.

Officer Nicholson went to the home and found dogs penned or tied to trees in the backyard. The home is owned by Roger and Renee Arthur. Their granddaughter was living in the home with her boyfriend Dustin Jackson.

When Officer Nicholson knocked on the door three dogs came to the window. But no one would answer the door.

When Officer Nicholson entered the back yard she found three dogs in a pen with no food or water. There was a dog house in the pen, but no straw or bedding in it.

One dog, a boxer, was extremely thin with its ribs and backbone showing. Two other dogs in the pen, a black and white terrier and a Cairn terrier, were also extremely thin.

In another small pen, Officer Nicholson found an Australian Shepherd mix that was very thin with no food or water. The pen was covered in debris of trash and sticks and covered in feces so much so that the dog stood on top of the doghouse or stood in feces. The dog house had no bedding.

The next dog was a young pit bull mix tied with a rope to a tree. The dog could not reach the doghouse and had been tangled for some time based on the number of tree limbs and trash including a satellite dish wrapped in the tether. This dog had no food or water and was in the worse shape of all the dogs.

There was no fat on the dog’s body. The muscle had been eaten away and the dog was starving to death.

“Every rib and vertebrae were visible. The shoulder and hip bones were protruding. You could literally see the bones in the dog’s tail. This dog was aggressive when I got too close, it snapped at me. I couldn’t even help the dog by untangling its tether,” Nicholson noted in her report.

Nicholson again went to the door and knocked. There were several vehicles parked in the driveway. Still, no one answered. A neighbor who was watching told Nicholson the family was home. Nicholson continued to knock but got no response from anyone inside.

Officer Nicholson then proceeded to the Prosecutor’s Office to get a search warrant to remove the dogs from the home. The warrant was granted and the White River Humane Society was alerted that several dogs in poor health would be arriving soon. The dogs would have a police hold and would probably be housed there for a while. They agreed to bring crates and their van for transport.

“On our arrival, we did see a male exit a garage on the property. He approached us and identified himself as Roger Arthur. I explained to Mr. Arthur why we were there and I then read the search warrant to him. He
advised he understood. He advised he had been out of town for the past five days and that was why the dogs looked so bad, I advised him that I needed him to load his animals into the crates we provided. He was
cooperative and did help.”

Officers then went into the home and found Renee Arthur, Roger’s wife and the co-owner of the dogs. Three dogs were removed from the inside of the home including two Chihuahuas and one mastiff- Great Dane mix.

“These dogs too were severely underweight. All of the dogs inside and out were covered in fleas. One of the Chihuahuas had extreme skin issues and clumps of hair were falling out.”

Officer Nicholson inquired about any vet records for the dogs and Renee Arthur said there was none. None of the dogs had any vaccination records.

While on the scene Dustin Jackson arrived. He was upset that the officers were taking two dogs that were his the pit bull and the Australian shepherd.

The animals were transported to the White River Humane Society. On arrival, the dogs were checked in, evaluated by the shelter manager Teanna Dotts, vaccinated, photographed, weighed and fed and watered.

On Nov. 5 the State Veterinarian Dr. Jodi Lovejoy was contacted and asked to evaluate the dogs. She did that on Nov 6th and her report was forwarded to the Lawrence County Prosecutor’s office.

Officer Nicholson requested the 8 dogs not be returned to their owners.