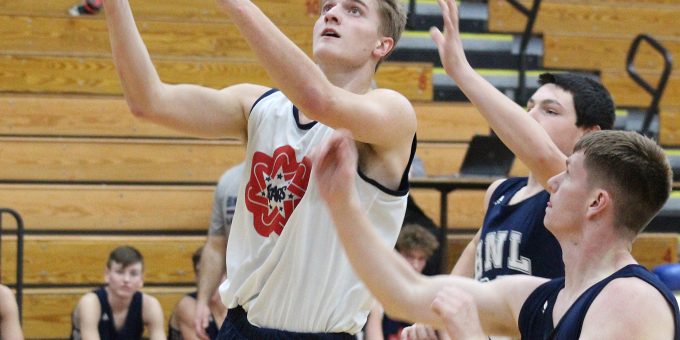 (BEDFORD) – At first glance, and that’s what Bedford North Lawrence’s intrasquad scrimmage really was, an initial look at the program under new guidance, BNL looked familiar.

Brayton Bailey can still drive the lane like a runaway semi down a mountain slope. Kooper Staley might be the program’s best streak perimeter shooter in the last 25 years. Trey Mollet still has a scorer’s mentality.

Second look, that’s not what new coach Jeff Hein noticed. He saw defensive mistakes, fatigue, gamblers rather than feet movers, things to work on as the Stars enter Week 2 of the preseason preparation for the 2019-20 season.

BNL unveiled its new look on Monday night, revealing old-school issues. Defense, the Stars will be reminded, is about stance, pressure and directing, not shadowing and standing. Those fundamentals might have lapsed over time. Not anymore.

So when the Stars combined for a sizzling 47 points in the final quarter of varsity action, Hein called a timeout to ask if anyone was guarding, or willing to guard, the kids doing all the scoring.

Very refreshing. Very necessary, for a team that will lack size.

The four quarters were definitely interesting. After two periods of projected varsity (spots are evaluated, all 32 kids in the program, almost every night) against the junior varsity, the blue-white split was the current top 12 for the final two.

After a 10-10 stalemate, thanks to a late surge by the Staley-Bailey combo, in the first quarter, the elder Stars smashed the younger set 24-0 in the second. Staley shot his squad to a 20-7 ‘win’ in the third, and the white team won the last-quarter shootout 29-18.

The scrimmage came after a practice session, so some legs were probably screaming by the end. That made the session as valuable for conditioning as it did for public consumption of what lies ahead.

“We looked ragged at times when we got tired,” Hein said. “We didn’t do a very good job defensively, staying in a stance and being in help position. It’s a work in progress. It’s going to take time.”

“Offensively we did some good stuff, but part of that was the fact we didn’t play real well defensively,” Hein said. “We did see some shots go in the basket, which is nice to see. But we have to shore up our defensive rebounding. We have to play as a unit on the defensive end.

“I like the offensive end. We have some kids that can shot the ball, and Brayton take break people down of the dribble and make good decisions with the ball.”

The highlights included three-point plays from freshman Colten Leach, Ben Cosner in transition (he totaled 12 points overall) during the second-quarter shutout, Staley’s sniping in the third, and Mollet’s 12-point fourth period. Zach Sasser, one of four seniors, had 10 points while doing dirty work in the paint.

The next step is Thursday’s IHSAA-sanctioned scrimmage with Columbus North, when the opponent won’t know the play calls.

“We’re anxious to see someone else instead of ourselves,” Hein said. “It’s hard to run your stuff against yourself because kids know what’s coming and cheat. When you play someone else, you can execute a little better.”

The next scrimmage will also be a key evaluation piece as Hein finalizes a lineup and rotations. Again, the defensive end will probably carry more weight.

“You have to find five kids that play together,” he said. “It’s not always your five best offensive players, it’s the five that will go out to do the things to win as a team.

“I’d like to see us be a little more patient on the defensive end. We get ourselves out of position and gamble a little much. We need to work as a unit.”

BNL will open the regular season at Bloomington North on Nov. 26. The home opener against Evansville Memorial on Nov. 30 has been postponed because of Memorial’s continued run in the state football playoffs. BNL’s new home opener will be against Bloomington South on Dec. 6.