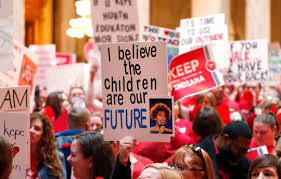 More than 140 school districts in the state have announced they will be closed that day and more than 13,200 people have registered to attend the event at the Reorganization for the Indiana State Legislature at the Statehouse. The North Lawrence Education Association says around 67 teachers from NLCS will be in attending tomorrow’s rally.

“About 30 percent of the teachers will be going to Indianapolis,” says Dr. Mike Wilcox Superintendent of Mitchell Schools. “We support our teachers, however, we will have school tomorrow, having a fun day at school and supporting education.”

Tuesday is the first day back for lawmakers for the 2020 legislative session.

Red of Ed Action Day is part of a national movement encouraging communities to wear red and show support for public education.

The Red for Ed event is being held on the grounds of the Indiana Statehouse, 200 W. Washington Street.

Governor Eric Holcomb will not be there tomorrow. His office says he will be in Florida for a Republican Governor’s Association Conference.

According to the schedule released by the Indiana State Teachers Association, the day will start on the south lawn, which is the area just north of Washington Street. That’s also the place to be to hear the speakers, who will be on the south steps.

The march will start following brief remarks from the south lawn at 10:50 a.m. and move north along Capitol Avenue, turn west onto Ohio Street for several blocks and head back south along West Street and then east along Washington Street in front of the Indiana Government Center, back to the Statehouse.