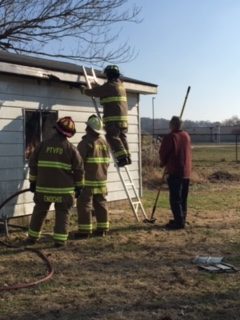 (SPRINGVILLE) – Perry and Marshall Township Fire Departments were dispatched to a garage fire on Bedford Street behind the fire station in Springville.

The alarm came in around 1:05 p.m. on Saturday afternoon.

Perry Township firefighters found smoke and flames inside a garage but were able to quickly get the fire under control. Marshall Township Fire Department was canceled while en route to the blaze.

According to Perry Township Fire Chief Jessica Voorhies, the cause of the blaze is suspected to be electrical. The fire is believed to have started in a stereo system that was operating at the time.

The garage is owned by Stan Armstrong, and the property is being rented by James Tate.

Firefighters remained on the scene for approximately one hour and a half making sure hot spots where extinguished and the fire completely was out.