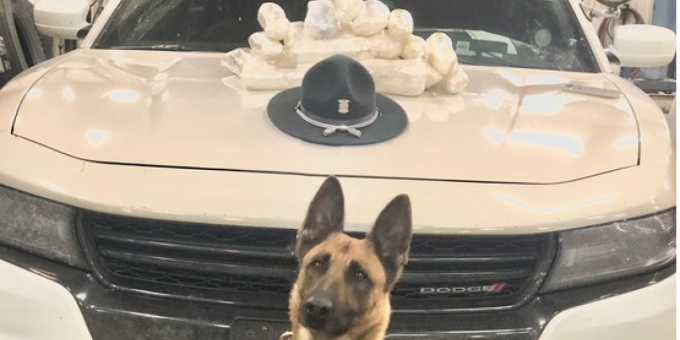 (HENRY CO.) – Indiana State Police arrested a California woman after finding 21 pounds of meth in her vehicle during a traffic stop Thursday night on I-70.

ISP Trooper Ray Otter was on patrols eastbound on I-70 just west of the New Castle exit before midnight Thursday when he saw a GMC Yukon that had a license plate light out and was following the vehicle in front of it too closely.

Otter turned his lights on, but the driver of the Yukon failed to stop and continued for about a mile before stopping on State Road 3 after exiting I-70.

Trooper Otter became suspicious after interacting with the driver, 47-year-old Yolanda Romana Bisaiz, of Los Angeles. There were two adult female passengers and two children under five in the vehicle.

ISP Trooper Tom Ratliff was nearby with his K-9 partner, Tora. The dog alerted troopers there were possible drugs in the Yukon.