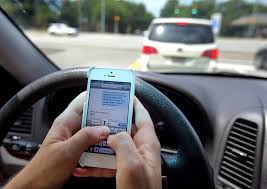 (UNDATED) – DriversEd.com, the leading online driving school, today released its 2019 Distracted Driving in America Report. The second annual study, which is a follow-up to DriversEd.com’s 2018 inaugural report, examines drivers’ behind-the-wheel behaviors, providing insight into the extent to which Americans, while driving, engage in a number of dangerous activities – from vaping and driving, to swiping on dating apps and driving, to selfie-taking, to video watching and more.

Survey data found that of vape device users with a driver’s license, 54% admit to vaping while behind the wheel.

Meanwhile, 52% of Americans say vaping and driving should be illegal.

“The act of vaping by itself carries serious health risks, especially for young people. Vaping and driving take those risks and adds the dangers of both impaired driving and distracted driving. These numbers on vaping and driving are startling, and parents need to speak with their teen drivers on this issue – as the consequences of vaping and driving can be deadly,” said Laura Adams, safety and education analyst at DriversEd.com.

Among the additional behind-the-wheel behaviors that U.S. drivers admit to:

“Our study shows that 70% of drivers admit to reading texts at a red light. What many don’t realize is that checking your phone at a red light can be just as dangerous as—or even more dangerous than—texting while moving, particularly at a busy, heavily-trafficked intersection,” added Adams.

“For families, one effective solution in the fight against distracted driving, and other dangerous behind-the-wheel behaviors is to create a parent-teen driving contract, which clearly outlines acceptable driving behaviors, unacceptable behaviors and the non-negotiable consequences of breaking the agreement,” said Adams.

DriversEd.com’s own parent-teen driving contract, which families are welcome to use, can be found at https://driversed.com/trending/parent-teen-driving-contract.

The full 2019 Distracted Driving in America Report – which includes additional insights and analysis – is available here.

About DriversEd.com
DriversEd.com is the #1 online driving school—with courses offered directly, through partners and through some of the largest schools in the country. As the industry leader in teaching defensive driving, DriversEd.com is the premier destination for online driver education, and the go-to resource for driving safety-related tips, news and strategies. The site offers comprehensive solutions, including online driver’s education, in-car driving lessons, traffic school, insurance, telematics and more. DriversEd.com’s tools are geared towards developing safe, confident drivers well-prepared for a lifetime of safe driving. Visit the DriversEd.com website, and connect with DriversEd.com on Facebook, Instagram, and Twitter.