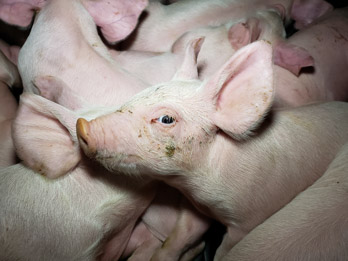 (BROWNSTOWN) – The Jackson County Prosector’s Office has cleared East Fork Farms in Brownstown of any wrongdoing.

The hog farm was under investigation after PETA, (People for the Ethical Treatment of Animals) a national animal rights organization’s call for an investigation into the farm’s practices.

PETA President Ingrid Newkirk issued a statement Thursday afternoon after the conclusion of the police investigation:

PETA vehemently disagrees with the conclusion that it is not cruel to leave piglets to drown in pools of waste and shriek as they’re pinned against cage bars and to allow mother pigs to watch as their babies suffer, die, and decompose just out of their reach. It is now up to all of us to take personal responsibility for such intense suffering and to choose not to eat pigs or other animals. PETA stands ready not only with videos of the animals’ misery but also with free vegan recipes and assistance in choosing a kind lifestyle.

More information about PETA’s exposé – including additional footage and a letter provided by the whistleblower is available here,