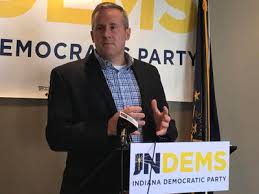 (BLOOMINGTON) — The Indiana Democratic Party chairman says he will remain in that position while he starts a campaign for a state Senate seat.

John Zody announced Thursday he would seek to replace Democratic Sen. Mark Stoops of Bloomington, who said last week that he wouldn’t seek a third term in the 2020 election.

Zody has been the state party chairman for the past seven years, a time during which Democrats haven’t won any statewide races or broken the supermajority holds that Republicans have in the Indiana House and Senate. The Bloomington-area Senate district is heavily Democratic, and Republicans didn’t have a candidate against Stoops in 2016.

Zody says he wants to ensure that “every Hoosier has a quality education, a livable wage, and a community that welcomes everyone.”