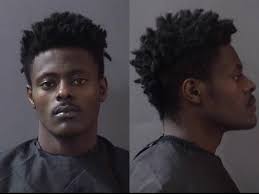 (FISHERS) – When Richard Garrett Jr. realized his presumptive bond of $45,000 was being boosted to $150,000 cash in the wake of a high-speed chase that led to the shooting of a Fishers police K9, his only response was, “That’s crazy, man.”

Garrett faces 14 counts, including eight low-level felonies, for allegedly leading police on a chase in a stolen car that exceeded 100 miles per hour on I-69 late Tuesday night and early Wednesday morning, bailing and running into the Saxony community, attempting to break in to at least two houses, shooting a police dog at point-blank range and being in possession of marijuana and a gun.

The killing of K9 Harlej resulted in a charge of striking a law enforcement animal and is punishable by two years in prison.

“The suspect did have indications of bite wounds on him,” said Fishers Police Chief Ed Gebhart after the initial hearing. “I think the K9 did its job effectively, did what it was supposed to do, did what it was trained to do, and I think ultimately saved lives of officers that were coming up behind him on the trail. I think if officers would have come up on our suspect, I think they would have been injured or I think killed.”

Gebhart was disappointed with the relatively minor charge Garrett faces for allegedly killing Harlej but was pleased that the magistrate exceeded the prosecutor’s request for a higher bond.

Prosecutors argued that Garrett, 19, provided a, “grave danger,” had, “no regard,” for the community and exhibited a history of, “instability,” during what was described as his, “crime spree.”

Gebhart said gun detection dogs from Dayton, Ohio, and Louisville combed the wooded area where Garrett evaded capture for three hours before the discovery of a Ruger .45 handgun.

“We’ll process that weapon and see where its been and what the trail is,” said the chief.

The Indianapolis Metropolitan Police Department (IMPD) wonders if that trail leads back to Indy.

“We can confirm that the suspect in the killing of the K9 is a person of interest in several IMPD cases involving a firearm,” an IMPD spokesperson said.

Fishers police are active participants in the Crime Gun Intelligence Center, which provides access to data bases and investigative techniques to track down the origin of seized illegal firearms and determine their links to any unsolved crimes.

“We have taken those weapons, 74 since this initiative began in March,” said Gebhart, “and out of 74, 29 of them have related links to violent crimes in the Indianapolis metro area so obviously their suspects are our suspects and they’re up here as much as they are down there.”

Garrett’s gun will be compared with evidence of weapons used in other recent Indianapolis shootings.

A medic who treated Garrett for his bite wounds told police that after his arrest, he heard Garrett make the sound of a racking shotgun and gunfire while verbally disparaging the slain K9.

A second suspect, Rashaana Farrow, remained with the stolen vehicle and was arrested.

Farrow did not flee and described Garrett as her boyfriend, but was unable to provide officers with his last name.