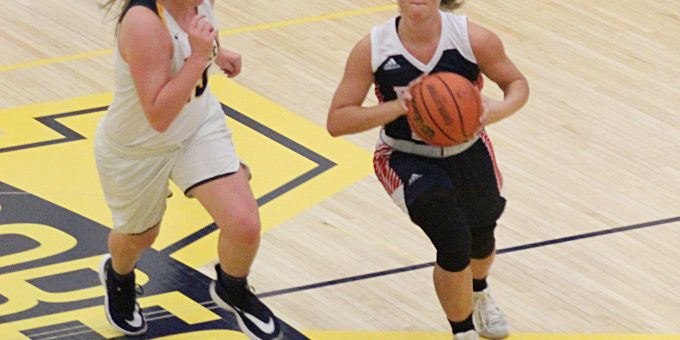 (BEDFORD) – The film doesn’t lie. Statistics, according to Mark Twain, can tell a tale. People certainly do. But the video reveals the naked truth, and Bedford North Lawrence got the chance to see how it was exposed, over and over.

Rewind. Play. Pause. Discuss. Coaches call it film study, the most revealing classroom. There is no hiding in the back row.

The Stars, thanks to a weather postponement earlier this week, have had the chance to replay the opening loss at Mooresville for several days. It’s not one to earn a thumbs-up review, the 55-50 loss panned by critics that dropped BNL from the Class 4A poll.

But it’s an important learning tool. BNL put it to good use as it prepares for the home opener with Class 4A No.4 Brownsburg on Friday night.

“We went back and watched film, and we thought we didn’t play very well,” BNL coach Jeff Allen said. “It’s a quality opponent on the road, a first game, and I’m OK with that. There were mistakes made – by myself, and the kids did, too – so they are things that are fixable.

“You’d like to think you start the season with all cylinders firing, but we lost two starters (from a year ago), and one of them was Miss Basketball. So the likelihood of that being a possibility probably wasn’t too high. We knew there would be some bumps in the road because our schedule is tough in November.”

The next bump is a big one.

“They haven’t changed much from last year, so we know how to prepare,” Allen said. “Everything relies on their pressure and their guard play. We’ll try to negate those two things. They’re both college-level players. We’ll have to stay on them defensively.

“And, of course, rebound. If we make them miss, rebound. That will be a big thing.” He mentioned that after Mooresville ripped the Stars 26-11 on the glass in the second half, and the film revealed just one defensive rebound at a key time (rather than multiple third-shot scoring possessions in the fourth quarter) would have turned the result.

If BNL reviews the video from last year’s clash, it will see how to solve and conquer a press. The Stars did that to near perfection, planting Jorie Allen in the middle of the full-court traps and getting her the ball in attack position. She scored a career-high 33 points, hitting 10 of 13 shots as BNL blasted to a 65-57 win.

Allen, of course, now plays for Indiana University, so BNL will have to slide someone else into the prime spot to pry open the press.

“We know BNL is well coached, therefore they will be well prepared,” Brownsburg coach Debbie Guckenberger said. “They play disciplined. We need to take care of the basketball, limit our turnovers, play hard and play smart.”

Madison Webb had 16 points and Chloe McKnight added 15 for the Stars in their opener.

Last meeting: Last year in the series debut at Brownsburg, Jorie Allen scored a career-high 33 points and grabbed 12 rebounds while powering the Stars to a 65-57 victory. Allison Bosse had 18 points for the Bulldogs.