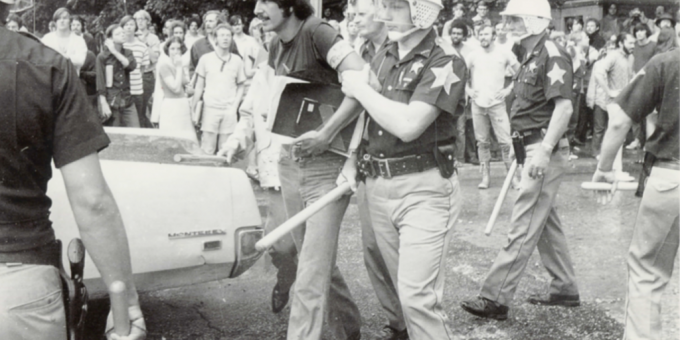 (BLOOMINGTON) – From supporting the civil rights movements to protesting the Vietnam War to participating in the Occupy Wall Street movement, students have long sat at the epicenter of activism and debates across the country.

Indiana University Bloomington is no exception. In fact, it’s the setting of a landmark free speech case, Hess v. Indiana, that made its way to the U.S. Supreme Court in 1973.

Marah Yankey, of News at IU Bloomington reports, the court’s ruling was commemorated Nov. 8 with a bicentennial historical marker in the Maurer School of Law’s Jerome Hall Law Library.

During an anti-war protest on campus in May 1970, a sheriff’s deputy arrested IU student Gregory Hess for shouting an obscenity-laced statement urging a crowd of 150 demonstrators to retake a street that police had just cleared. Hess was charged with disorderly conduct and convicted in city court.

The Indiana Supreme Court upheld the lower court’s ruling, claiming that Hess’ words were intended to incite and likely to produce additional lawless action from the crowd.

In 1973, the court overturned Hess’ conviction, finding the arrest to have been an unconstitutional infringement on his First Amendment rights. The court’s decision continues to stand for the principle that speech which does not incite immediate unlawful action is protected under the Constitution.

“The installation of the Hess marker is significant not only for its substance, but also because it is the first bicentennial marker that commemorates an event, rather than an individual or group,” said Austen Parrish, dean and James H. Rudy Professor of Law. “We are grateful to the Historical Marker Committee for recognizing the importance of the Hess case in the university’s history and to our late colleagues for their diligent representation.”

Modeled after the state of Indiana’s historical marker program and many similar municipal programs, the Indiana University Historical Marker Program notes significant people, places, events and organizations that have had an impact on the university, state, nation and world. It is a signature project of the IU Bicentennial.