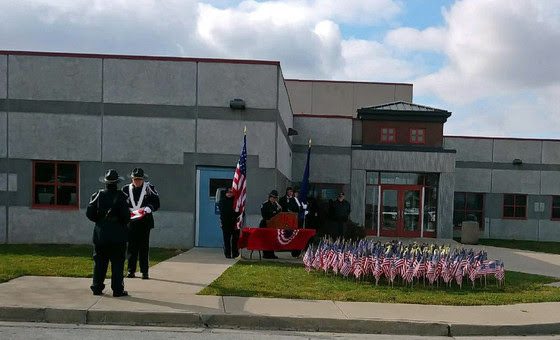 (ROCKVILLE) – Staff at the Rockville Correctional Facility gathered for the thirteenth consecutive Field of Flags ceremony honoring all American veterans with special emphasis on those connected locally.

Joined by a contingent of volunteers from the Rockville, Indiana chapters of the American Legion and the Veterans of Foreign Wars staff and families gathered on a brisk November morning to pay homage to the brave men and women who protect all of us, and our way of life – the American soldier, sailor, airman, and marine, active, retired, and those who have achieved their great reward.  This event is a tangible way for staff to join the community to show their respect and admiration for their family, friends, and coworkers who have served.

The physical embodiment of the Field of Flags shows several adorned with different colored ribbons.  Unadorned flags represent current or former military personnel not currently deployed overseas. Yellow ribbons are for those currently deployed. Purple ribbons give thanks to those service personnel who earned that most distinguished of honors, the Purple Heart which is given to those wounded in action. And black ribbons honor the unknown soldiers, those who are listed as missing in action, were prisoners of war or who have passed on.

The Indiana Department of Correction Region 5 Honor Guard presented and retired the colors for the ceremony. The Rockville VFW presented a 21-Gun Salute and the playing of “Taps” on a single bugle. Unlike any other, that melancholy tune resonates with the sacrifices made in the name of freedom in the hearts and minds of all who hear it.

RCF Correctional Officers Max Ditto Jr., (retired), and Rex Thomas work alongside Community Involvement Coordinator Susie Martin to facilitate this annual ceremony and put in dozens of volunteer hours to make it the success it is.  Susie served as the event emcee while Max provided the narration.  Rex used his vocal talents in the singing of the Star Spangled Banner.  Both Max and Rex are veterans of the United States Army.

The correctional profession is a perfect fit for veterans as it shares many skill sets with military service including the need for order and discipline.  If you are interested in a rewarding career in corrections please visit WorkforIndiana.in.gov where you will find openings for Correctional Officers and Caseworkers.