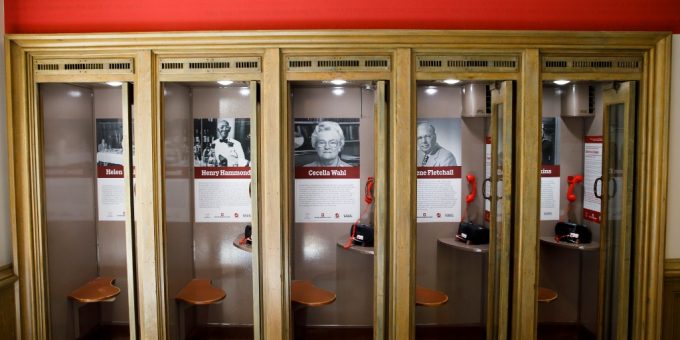 (BLOOMINGTON) – Within every university are countless individuals who go unrecognized for their hard work, long hours and dedication that keeps the university standing.

Haley Jordan, of News at IU Bloomington reports, to honor such unsung heroes, the Indiana Memorial Union and the Indiana University Office of the Bicentennial are presenting “Hidden Hoosiers,” an interactive exhibition featuring 10 such individuals.

The exhibition, on the main floor of the Indiana Memorial Union, makes use of the historic phone booths to tell the stories of “Hidden Hoosiers” who helped build IU into the institution it is today.

Junior Alex Ruschman, an intern with the IU Office of the Bicentennial, partnered with the Union Board to create “Hidden Hoosiers.”

“We have a pretty diverse selection of people that we’ve chosen for these exhibits, ” she said.

Ruschman said she took over the research of a former intern and spent many hours in the archive room or in basements shuffling through file cabinets and assorted photographs from IU’s history. She followed trails of well-known alumni such as Herman B Wells with the hopes that it would lead her to more Hoosiers with stories that deserve recognition.

“It was almost like a treasure hunt looking for stories,” she said. “It was a cool aspect to kind of uncover these things and find out about these people.”

Ruschman started her research in August 2018. After selecting Hoosiers to feature, she wrote scripts from their perspective and recruited Jacobs School of Music students, fellow Union Board directors and IMU staff to record three-minute voiceovers for each Hoosier. Perry partnered with WIUX, which provided free recording and editing of the tapes.

The five phone booths installed in 1959 as part of the hotel sit across from the Tree Suites hallway. Each booth was updated with fans, vents and lights that flick on when the door opens. They now house a bright red telephone, a boom box and posters with information about the “Hidden Hoosier.”

People who find themselves in this area are free to sit in the booths, each one containing a different Hoosier, and listen to the stories.

The exhibit will be up for a year and will swap out stories next semester. For this semester, the booths have the stories of:

After over a year of thorough research and creativity, Ruschman and Perry have seen their long hours of treasure hunting materialize into an exhibition they’re proud of.

“The project itself is very important to recognize people from IU’s history that haven’t been able to be recognized,” Ruschman said. “They deserve it.”