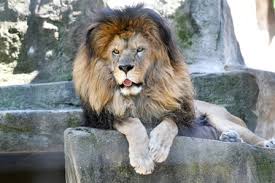 (SOUTH BEND) — Zoo officials say a 17-year-old lion that was a longtime fixture at a northern Indiana zoo has been euthanized due to chronic age-related conditions.

The male lion, named Tango, was humanely euthanized this past week at the Potawatomi (pot-ah-WAH’-toh-mee) Zoo in South Bend after his condition suddenly worsened.

The South Bend Tribune reports that Tango and his lion brother, Onyo, arrived at the zoo in 2002 when they were 5 months old.

Executive Director Josh Sisk says it’s hard to think about the zoo “without first thinking of our iconic lion brothers.” He says Tango’s passing is a tremendous loss for the community.

Tango was known for sticking his tongue out and his bond with his brother, who’s also showing signs of his age.