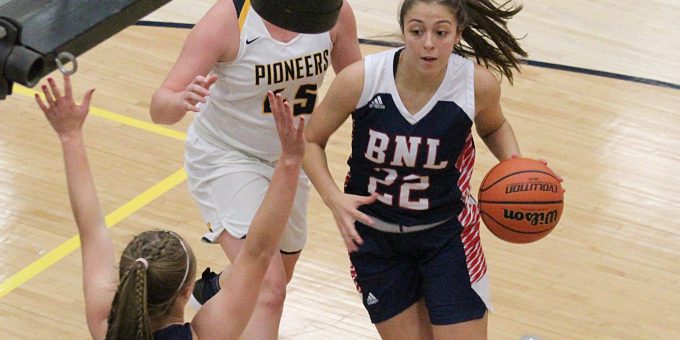 (BEDFORD) – Bedford North Lawrence is definitely a team on the rebound. And that’s an intended double entendre, with multiple meanings, after a rocky season debut.

Bruised, disappointed and exposed as vulnerable in a key fundamental, the Stars are in bounce-back mode as they brace for another tough opponent in the home opener on Tuesday night. Vincennes Rivet might be a small school, but it’s a big-time program without fear of larger-class foes.

Rebounding became an instant top priority after the Stars were hammered in that statistical category. They labeled it a concern after the June scrimmages, thought it was fixed, but discovered they had not grown much over the summer. Mooresville dominated that stat 26-11 in the second half and collected a game total of 16 offensive rebounds.

“You’re going to miss shots, you might make a bad pass once in a while, but your defense and rebounding should be constant,” BNL coach Jeff Allen said. “That’s the most disappointing thing for me, that’s what we’ll try to work on.

“I didn’t like our defense at all. We were a step slow on the rotations, we didn’t rebound well. That’s been a staple for us, our defense and rebounding, But it wasn’t good.

Yep, here comes the next high-profile test. Rivet has been a Class A power since Tim Young took over the team in 2007. He won a state title in 2011, and Rivet has been to back-to-back state finals under veteran coach Rick Marshall (formerly of North Knox, for the BNL historians who remember those epic battles in the 1980s). Marshall has gone 56-4 in his two-plus seasons.

The Patriots are supposed to be in a reloading phase following the graduation of Grace Waggoner, who set the school scoring record before joining BNL’s Jorie Allen at Indiana University. But they didn’t look too lost when they crushed Evansville Harrison 94-27 on Saturday night in their opener.

“You don’t replace an athlete like Grace Waggoner,” Marshall said. “This team may not start pretty, but it will gel during the season.”

Well, Rivet was pretty enough to hand Harrison the ugly loss. Tia Tolbert, a senior guard who averaged 13.3 points past year while earning a spot on the Junior All-Stars, totaled 21 and went over 1,000 for her career. Sophomore guard Maddisyn Halter added 18 points and senior Macee Hamilton scored 16 in the blowout.

“We’ve built a program that expects to succeed,” Marshall said. “What I like about BNL is they will expose your weaknesses. It’s a good opponent for us because the video becomes crucial for later on. It’s educational for these young ladies.”

Madison Webb paced BNL with 16 points while Chloe McKnight tallied 15 in the opener.

Last meeting: This is the first meeting in the series.

Game notes: Rivet has won 7 semistate titles and 1 state championship (2011) in the last 12 years. The Patriots will compete in Class 2A this season because of the success factor rule. Rivet coach Rick Marshall is 16th in career wins with 422 in his 23rd year.