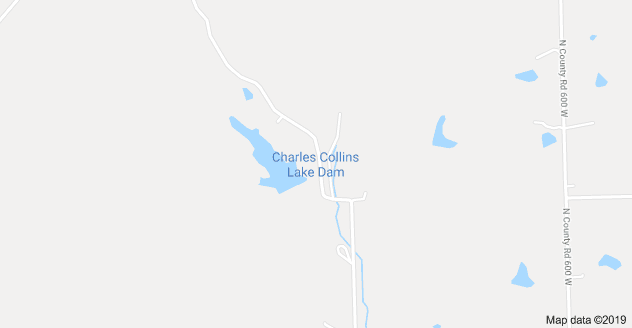 (INDIANAPOLIS) — Southern Indiana’s Collins Lake dam was built in the mid-1960s to provide flood control to a region that includes the adjacent tourist destinations of French Lick and West Baden Springs — storied communities that are home to grand restored hotels.

Collins Lake is empty most of the time, its collected water quickly percolating into the area’s porous geology that includes caves and sinkholes. But it’s also one of 65 Indiana dams deemed to be in poor or unsatisfactory condition and rated as “high hazard” due to the potential for loss of life should they fail during a historic deluge.

Structural problems such as cracks and erosion, deficient spillways, or water seeping through their embankments have been cited for many of these dams. They are among at least 1,688 high-hazard dams in poor or unsatisfactory conditions found across the nation during a two-year investigation by The Associated Press.

A failure of any of these dams could send water cascading downstream, in some cases through homes and businesses.

Indiana has the nation’s ninth-highest number of such dams, just behind Kentucky, which has 78 such dams, according to the AP’s analysis. The review excluded five states that did not fully comply with the AP’s records requests and included the U.S. territory of Puerto Rico.

The Indiana Department of Natural Resources, which monitors dam safety, wants improvements to the Collins Lake dam, including upgrades to its spillway. If heavy storms filled up the lake’s basin and the dam failed, the water flowing downstream would impact French Lick, West Baden Springs, other communities and several highways.

But Rudy Freeman, chairman of the Springs Valley Conservancy District, which oversees the dam, said those projections are based on a historic torrent of more than 2 feet of rain.

“If we got 26 inches of rain, that would be the last worry in the world we would have,” Freeman said.

The conservancy district is working to install a large crushed stone called riprap along a discharge pipe, which he said the DNR recommended. But suggested changes to the dam’s spillway could cost up to $2 million — an amount Freeman said was unaffordable for the property owners who pay taxes to the conservancy district for dam maintenance.

“There’s no way. They would need some kind of grant to pay for that,” he said.

Ryan Mueller, director of the DNR’s division of water, said the state agency is sometimes told by dam owners that they can’t afford to make recommended repairs or improvements.

“Whether or not that’s the case is not for us to determine, but that’s often brought up as a reason for why a dam is in disrepair,” he said.

Indiana has a total of about 1,200 dams, about 70% of which are privately owned, Mueller said. Most of them are earthen embankment dams and the majority are less than about 50 feet tall.

The state has more than 250 high-hazard dams, a term used when a failure likely would result in the loss of human life. The 65 high hazard dams rated in poor or unsatisfactory condition found by the AP’s investigation are a subset of those.

While Indiana doesn’t experience hurricanes like coastal areas, it has seen widespread flooding in the past decade. A report from the U.S. Geological Survey notes that a June 2008 storm dumped up to 11 inches of rain on parts of Indiana, damaging over 100 dams and levees. More than 8,400 people had to be evacuated and three people died.

Although that deluge damaged some of the state’s high hazard dams, none of them failed, said Dale Gick, the DNR’s director of engineering.

One of the state’s high hazard dams in poor condition is southwestern Indiana’s Busseron Dam, which creates the 22-acre Booker Lake used primarily for flood control and watershed protection. If that dam failed, documents indicate the resulting wave of water would inundate more than 90 structures, including a nursing home, golf course, railroad and state highway. The latest inspection found severe erosion along the dam’s entire length, caused by years of waves washing against the dam’s embankment.

Don Wells, treasurer of the Busseron Conservancy District, said the district is planning work in the coming months to address that erosion at a cost of about $50,000.

Indiana law requires the owners of high hazard dams on the federal government’s inventory to hire an engineer to conduct inspections every two years. The DNR then reviews those reports and responds with any additional instructions and a timeline for correcting deficiencies, Mueller said. The DNR currently has five full-time staffers in its dam safety office but intends to hire two more soon, he said.

If the state agency determines that a dam owner is unresponsive or unwilling to make necessary repairs, it can issue a notice of violation to the owners and, in some cases, go to court to try to force the improvements.

Indiana law doesn’t require dam owners to complete an emergency action plan detailing how to notify and evacuate nearby residents if the dam fails. But Mueller said the DNR “very strongly encourages” such plans and has been helping private dam owners develop and complete them. To date, 158 of the state’s more than 250 high hazard dams have such plans.