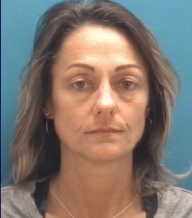 (COLUMBUS) – A Columbus woman was arrested on drug charges after an officer saw her car had no taillights near the intersection of Second and Sycamore streets in Columbus Thursday night.

Police stopped 45-year-old Carrie Pitts and when he approached her vehicle he smelled the strong odor of burnt marijuana coming from the car.

A vape pen was located as well as two corner cut baggies. One bag contained a grey power suspected to be heroin and the other bag contained a white power that was identified as meth.

Pitts received a written warning for having no taillights and was taken to the Bartholomew County Jail on charges of possession of a heroin, methamphetamine, marijuana and drug paraphernalia.