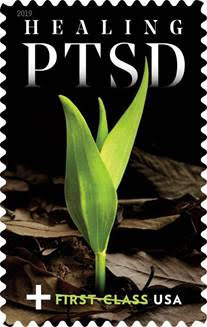 (UNDATED) – The US Postal Service today announced that a semipostal stamp to help raise funds for those diagnosed with post-traumatic stress disorder (PTSD) is being issued Dec. 2 at McGlohon Theater at Spirit Square in Charlotte, NC.

The Healing PTSD semipostal stamp features a photographic illustration of a green plant sprouting from the ground, which is covered in fallen leaves. The image is intended to symbolize the PTSD healing process. Art director Greg Breeding designed the stamp with original art by Mark Laita.

Tens of millions of Americans will experience PTSD in their lifetimes. Today, the nation is increasingly dedicated to compassionately treating this mental health issue.

While post-traumatic disorders have long been a subject of study, PTSD was not officially added to the Diagnostic and Statistical Manual of Mental Disorders, a widely used reference guide published by the American Psychiatric Association, until the late 20th century.

The condition develops in some children and adults who have survived a traumatic event. Experiences such as a natural disaster, car accident, physical or sexual assault, abuse, and combat, among others, can trigger PTSD.

When the Healing PTSD semipostal stamp becomes available, it will be sold for 65 cents. The price includes the first-class single-piece postage rate in effect at the time of purchase plus an amount to fund PTSD research. By law, revenue from sales of the Healing PTSD semipostal stamp — minus the postage paid and the reimbursement of reasonable costs incurred by the Postal Service — will be distributed to the U.S. Department of Veterans Affairs.

Under the Act, the Postal Service will consider proposals for future semipostals until May 20, 2023. The Federal Register notice outlining this program can be found at the following url: www.gpo.gov/fdsys/pkg/FR-2016-04-20/pdf/2016-09081.pdf.

Proposals will only be considered if they meet all submission requirements and selection criteria. They may be submitted by mail to the following address:

Suggestions may also be submitted in a single Adobe Acrobat (.pdf) file sent by email to semipostal@usps.gov. Indicate in the Subject Line: Semipostal Discretionary Program.

Customers may purchase stamps and other philatelic products through the Postal Store at usps.com/shop, by calling 800-STAMP24 (800-782-6724), by mail through USA Philatelic or at Post Office locations nationwide.