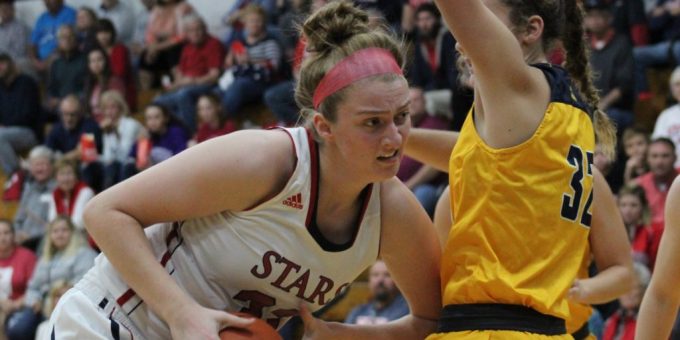 (BEDFORD) – Like a phone’s maps app giving multiple routes to reach the intended destination, Bedford North Lawrence is charting a new course with the same ending in mind.

Void of an established superstar for the first time in a decade, the Stars will start the 2019-20 campaign in search of a true identity, with twists and turns ahead, with unchanged goals. It’s going to be an interesting journey.

BNL, listed No.10 in the Class 4A preseason poll, will start this new road at Mooresville on Saturday afternoon. The ranking is currently based on tradition and name recognition more than the latest results. The Stars will have to prove their worth, and there’s no tougher place than Mooresville to do that.

The Pioneers, who opened the year with a 66-40 victory over Northview on Tuesday night, already have the debut jitters cast aside. BNL has been impressive in two scrimmages of late, but when the lights come on for real and the outcome matters, there’s a certain crackle of anxiety and nerves that even the most veteran of teams must conquer.

“It’s a first game,” BNL coach Jeff Allen said. “There will probably be some ‘Oh boy’ moments out there. But I feel like we’re ready. And we’re to the point where we need to play. We’re a little tired of practicing every day against each other. I’m excited to see what the kids can do.”

What can BNL do? There have been major hints. The Stars, looking for star power with the graduation of career scoring leader and Miss Basketball Jorie Allen, will count on considerable contributions from senior center Madison Webb (9.3 points, 7.0 rebounds a year ago), from junior wing Chloe McKnight (9.0 points), and from talented junior Irye Gomez (the best scoring threat in June and early November).

Add senior Gracie Crulo-Rood and freshman Karsyn Norman into the lineup, plus depth off the bench that Allen intends to use in an up-tempo style, and see what happens. BNL could certainly use a shot of confidence with an opening triumph.

“I think it’ll be really important,” McKnight said. “How we start the season is how we’re going to end it, and it will give us a confidence boost as to how good we are. I think we’ll be pretty good. We’re pretty deep and we all bring something good to the table.”

BNL won last year’s opener with Mooresville 49-31, the springboard for a 12-1 start and a 23-6 finish with a sectional title. The Stars have won 9 of their last 10 openers.

“Any time you can win up there, it definitely adds to your confidence,” Allen said. “I think Mooresville is a tough place to win, with their tradition and how hard they play and compete.”

Mooresville is the reflection of veteran coach Mark Hurt, a no-nonsense, shoot-straight guy with the record to prove his value. He’s 12th on the all-time wins list.

“Mark has had a lot of success, and he has a certain way of doing things,” Allen said. “His kids understand that. They’re disciplined, they play hard. It’s going to be a first tough test for us on the road.”

The Pioneers will feature senior guard Paige Gregory, who averaged 11.1 last season. She struggled against Northview, but Ally Graber came off the bench to score a game-high 17 while Madelynn Denny added 12. They will test BNL’s toughness, especially now that the fear factor of Allen (who scored 25 points last season against the Pioneers) is gone. BNL will have to find other options, and style points won’t be necessary. This game will be won with the fundamentals.

“The two things I will talk about will be rebounding and keeping people in front of us,” Allen said. “And we have to take care of the basketball, going on the road. We don’t want to settle for tough shots.

“We’ve gotten better at rebounding (which was exposed as a concern during the June scrimmages) but it will be a work in progress all year long. That’s one thing we have to continue to get better at, to compete at a high level. We’ll continue to focus on that.”

Mooresville went 17-10 last season (after an 0-5 start) and won a sectional title.

Last meeting: Last year at BNL, the Stars raced to a 14-1 lead and stopped the Pioneers 49-31. Jorie Allen had 25 points while Madison Webb added 8 points and 9 rebounds for BNL. Paige Gregory totaled 8 points for Mooresville, which shot only 25 percent from the floor.

Game notes: Mooresville coach Mark Hurt owns a 443-184 record in 27 seasons overall (381-129 in 22 years at Mooresville), ranking him 12th on the all-time career wins list in state history. BNL has won six of the last seven meetings in the series.