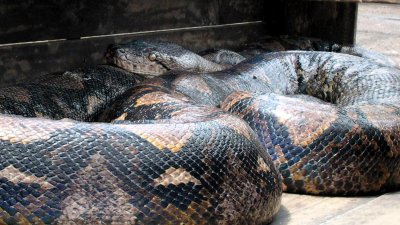 (OXFORD) — An Indiana town is considering restrictions on snakes after a woman was strangled by an 8-foot-long (2.4-meter-long) python.

The 36-year-old was found on the floor of a snake-filled home in Oxford. The python was wrapped loosely around Hurst’s neck. Hurst lived 20 miles (32 kilometers) away but regularly visited the house where she owned 20 of the approximately 140 snakes. None are venomous.

The home is owned by Benton County Sheriff Don Munson, who is a snake breeder. Munson hasn’t commented.