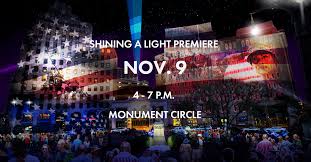 (INDIANAPOLIS) – After a year of planning and transforming Monument Circle, Downtown Indy, Inc., and the Indiana War Memorials Commission will debut the $7.6 million Shining A Light, made possible by Lilly Endowment Inc., on Saturday, Nov. 9 from 4 p.m. until 7 p.m.

Usher in Veterans Day and recognize those who have and continue to serve in the U.S. Armed Forces. Brand-new, high-tech video and lighting projections, new staging and surround sound elements will come to life.

As evening falls, attention will be drawn to the buildings of the Southeast Quadrant as the debut of Indy’s Signature Salute captivates and inspires all who gather. The five-minute program will bask Monument Circle in spectacular lighting with a synchronized original score from the Indianapolis Symphony Orchestra written by Emmy Award-winning producer John Colby.

Coordinated video and light projections featuring images of historic significance will unfold across the surrounding building facades and statues on the Indiana Soldiers and Sailors Monument will be illuminated. As the music crescendos, four beams of light will soar skyward from each quadrant lighting Victory (atop the Monument), signaling Indianapolis as the Crossroads of America.

The Signature Salute will play a few additional times on Nov. 9 (only for the Premiere)

The Shining A Light Premiere will close the south half of Monument Circle from 10 a.m. – 8 p.m. The entire Monument Circle and spokes (Market and Meridian streets) will be closed from 1:30 – 8 p.m.