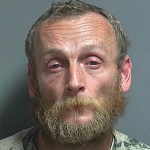 (BLOOMFIELD) – A Lyons man accused of child molesting is being held on an $80,000 surety bond with 10 percent allowed.

As of Friday, England had not posted bond and remains in the Greene County Jail.

Prosecutor Jarrod Holtsclaw notified the court that the State will seek a habitual offender sentence enhancement.

England was arrested after IU Health Bloomington Hospital contacted the Greene County Sheriff’s Department to report they were treating a 12-year-old who had allegedly been molested by a Greene County man.

Detectives spoke with the child, the child’s mother and another adult who lives with them.

The child was able to describe the sexual assault in detail along with an adult who walked into the room while the assault was happening.

The child’s family members said they had let England stay in their home because he had a drug problem and they were trying to help.

When police interviewed England, he admitted he had sexually assaulted the child, but he blamed the child for the incident.

Police then obtained a DNA sample from England. Those results are pending. He was arrested after the interview.