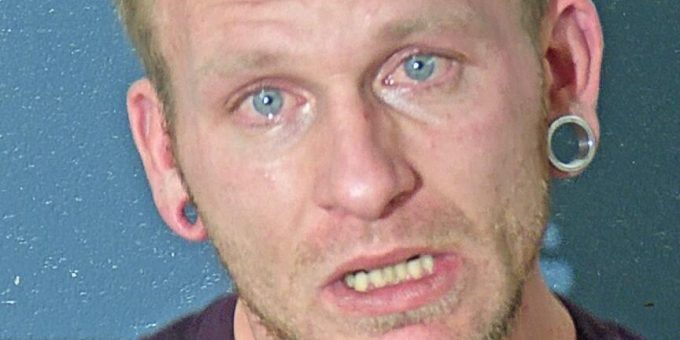 (BEDFORD) – A Bedford man was arrested after Bedford Police were called a domestic dispute in the 600 block of T Street, early Saturday morning.

“The victim and witnesses told police that 32-year-old Nathan Kimbrel, of 723 U Street, was at the house yelling and beating on the house wanting to speak with the victim,” said Bedford Police Chief Terry Moore. “While officers were speaking with the victim, another officer outside the residence located Kimbrel running from the area.”

The officer yelled for Kimbrel to stop but he refused. That officer began looking for Kimbrel.

“Officers received information that there was an active protective order from the victim against Kimbrel,” Chief Moore added. “Officers arrived at Kimbrel’s residence and located him hiding inside a dog house.”

After identifying themselves as police officers, officials ordered Kimbrel to exit the dog house.

“After several orders to exit the doghouse, he refused and had to be physically removed from the dog house,” added Chief Moore. “While speaking with Kimbrel he showed usual signs of intoxication and would not stop screaming while being placed into a patrol car.”

Kimbrel was arrested on charges of resisting arrest, disorderly conduct, and public intoxication.