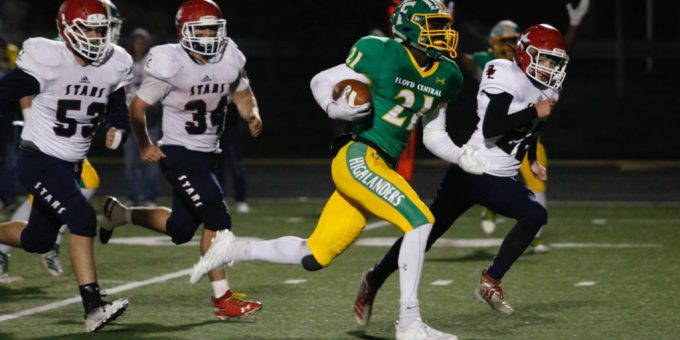 (GALENA) – Unstoppable, fast and ferocious with the football, Wenkers Wright gave Bedford North Lawrence’s defense a wink, a nod and a few stiff-arm goodbyes as he left the Stars glued to the turf and carried Floyd Central to a postseason victory.

Wright, fleet in the open field and tough in traffic, gashed BNL for four touchdowns as the No.12 Highlanders fought off the Stars 44-30 in the Class 5A Sectional 16 semifinal on Friday night.

Floyd Central (8-2 and the sectional favorite) advanced to the championship against Jeffersonville, which stopped New Albany in the opposite bracket 23-7. BNL bowed out at 3-7.

The Stars were gallant with the ball, as senior quarterback Dalton Nikirk posted career-best numbers in his final game, as wingback Tabin Stillions saved his best for last with a tremendous double-double of triple-digit yards in rushing and receiving. Yet it wasn’t enough as BNL’s beleaguered defense could not come up with important stops when a comeback was possible.

Twice, the Stars scrambled back from a 20-point deficit and rumbled within one score, needing the ball one more time to make the Highlanders squirm. Twice, Floyd cruised back with devastating, demoralizing touchdowns in the fourth quarter, the sign of a championship team.

Wright, who ranked seventh in the state in rushing prior to the rematch with the Stars, totaled 219 rushing yards, including the 30-yard burst through tacklers and chasers for the clinching score with 1:23 left. If BNL had a stop sign, he ran it.

BNL lost a 29-21 battle with the Highlanders three weeks earlier in a wind-swept rain storm, and kept Wright in check – save for two long breakaways. This time, the wind was Wright as he swept past.

Give BNL’s offense credit for courage. Stillions, always seeking gaps on the field perimeter, raced for 100 yards, caught four passes for 105. Nikirk threw two touchdown passes, and Derek Hutchens grabbed six passes, including a beautiful toes-inbounds snag on the sideline. That would have been enough on a lot of nights.

But not this one.

“Too many mistakes to win a game against that team,” Weber said. “But they played hard. They kept battling. They had plenty of chances to quit and roll over all year and they didn’t do it. They battled and I’m proud of them for that. I just wish we could have climbed on top.

“Sometimes you run out of time.”

BNL scored first with an impressive opening drive, with key plays from Owen Beaver (26-yard catch from Nikirk) and Stillions (33 yard dash outside). Skyler Bates cashed it in from 5 yards.

But Floyd’s offense was invincible, at least with BNL’s defense in struggle mode. The Highlanders scored all four times they got possession in the first half, with either Wright (116 yards rushing) gashing or Tristan Polk passing (10 of 12 for 136 yards). Somebody evidently told Polk (a 25-percent passer during the regular season) he was Tom Brady against BNL’s secondary.

Wright was quicksilver, slippery and uncontainable, as he ripped off a 14-yard untouched touchdown run for a 7-7 deadlock, a 15-yarder up the vulnerable middle for a 14-7 lead, and a 7-yarder (following Calvin Brown’s interception of a Nikirk deep pass) for a two-score advantage.

Polk hit Kaleb Quenichet from 23 yards for a 27-7 lead late in the half, and a running-clock blowout appeared likely. But the Stars finally answered with a necessary, gut-check drive – although aided by a officiating crew miscue – to end the half.

The Stars marched 80 yards, with Beaver making two catches to breathe life into the move. But BNL also took advantage of a fifth-down conversion (that’s right, the Stars got five cracks when the officials lost track of the correct downs following a penalty, Nikirk scrambling 6 yards on the fifth snap to move the chains) and scored when Nikirk hit Beaver from 21 yards with 13 seconds left.

Cole Hussung drilled a 41-yard field goal for a 30-14 lead late in the third, but here came BNL’s big-heart answer. Nikirk hit Stillions for 43 yards, setting up freshman Dylan Nikirk for a one-yard option dash (on a true fourth down at the goal line). After Bates ripped the ball from Floyd receiver Landon Deweese after a long grab and forced a turnover, the Stars scored again with Nikirk hitting Hutchens from 34 yards. Suddenly, a winnable game was within BNL’s grasp.

Floyd plucked it back. With all eyes on Wright, Polk connected with Quenichet (so open no BNL defender was within 15 yards) for a 27-yard score with 7:53 left.

BNL added Ethan Baer’s 31-yard field goal with 4:20 remaining, and again the Highlanders hammered away, with Polk and Wright taking turns on a 7-run, 75-yard drive to end the suspense.

“That’s a good win, a big win,” Bragg said. “That was a dogfight until the end of the game. They killed us with their passing game. But our kids didn’t quit. We kept fighting and came out with a victory.

“The Stars are not going to quit until the clock reads double-zero. We can’t quit either.”

Polk finished 15 of 19 for 234 yards, with Deweese and Quenichet catching six apiece.