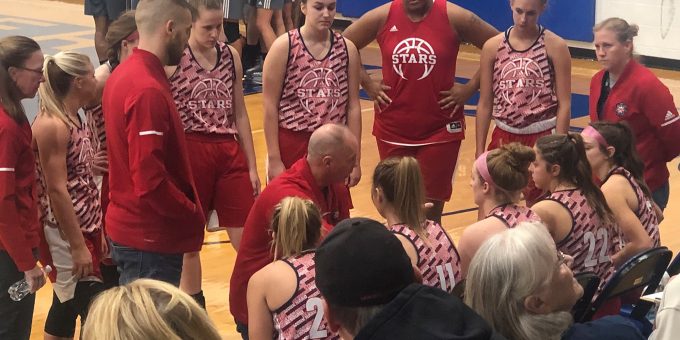 (INDIANAPOLIS) – After a sluggish start, Bedford North Lawrence answered one of the main questions concerning this latest edition: the Stars – if the results of the IHSAA-sanctioned scrimmage are a true measuring device – are going to be OK.

Maybe even better than OK.

BNL spotted Class 3A state contender Heritage Christian the first 8 points, then battled back to force a virtual stalemate during the three quarters of varsity action on Saturday afternoon.

The Eagles, one of Indiana’s premier programs with seven state championship banners, zipped to a 17-11 advantage after the first quarter, but BNL roared back for an 11-11 deadlock in the second and a 15-10 “win” in the third. That totals a 38-37 edge for Heritage after 24 minutes.

Heritage, featuring Div. I talent in the backcourt, pushed BNL in all phases, with speed and athletic ability, and the Stars were up to the challenge.

“‘I’m really happy,” BNL coach Jeff Allen said. “We have things to fix and adjust, but it was a great first test. If we play that way going forward, we’ll be OK.”

Tyranny Brown shot the Eagles in front with 9 first-quarter points, part of her game-high 19, and Sydney Watkins had all 13 of her points in the first half. BNL countered with Chloe McKnight (7 points in the first, 9 total), Madison Webb (6 of her 8 in the second) and Irye Gomez (6 of her 10 in the third).

“We had not seen that type of speed, and we were down out of gate,” Allen said. “Then we regrouped and maybe at times had the advantage going forward.

“We didn’t shoot the ball well from the perimeter, but Chloe and Irye did a god job of attacking the basket. Madison got zeroed in and started doing stuff inside people can’t stop.”

Heritage star point guard Ari Wiggins, who already has an offer Illinois and other major programs, had only 2 points but ran the Heritage attack. She put constant pressure on BNL’s press and various defenses.

“Wiggins has the point-guard mentality, looking to distribute,” Allen said. “We tried to defend her pretty well. We lost track of Watkins and Brown a couple of times, but they’re good athletes. So for the most part we did a good job.

“We want to be a pressing, running team and they’re good at that. So we have to be pleased with that. They are equal to, or better than, anyone on our schedule.”

BNL dominated two quarters of JV action by a 19-8 count.

The scrimmage was the final preseason workout for the Stars before the regular-season opener at Mooresville. That game has been moved back to Nov. 9 (with a 12:30 p.m. varsity start) because of Mooresville’s success in the football state tournament.