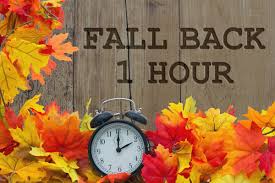 (BEDFORD) – Remember to set your clocks back an hour on Sunday.

Daylight Saving Time ends November 3 – that means when the clock strikes 2 a.m. we’ll “fall back” an hour to 1 a.m.

Daylight Saving Time was developed to reduce electricity usage by extending daylight hours during the year, but not all Americans follow it. Hawaii and most of Arizona have opted out, as have the U.S. territories of Guam, Puerto Rico, Virgin Islands, and American Samoa.

Daylight saving time in the US started as an energy conservation trick during World War I and became a national standard in the 1960s.

The idea is that in the summer months, we shift the number of daylight hours we get into the evening. So if the sun sets at 8 pm instead of 7 pm, we’d presumably spend less time with the lights on in our homes at night, saving electricity.

It also means that you’re less likely to sleep through daylight hours in the morning (since those are shifted an hour later too). Hence “saving” daylight hours for the most productive time of the day.