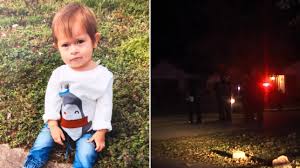 (INDIANAPOLIS) — A 21-month-old girl has been struck and killed by a car outside her Indianapolis home.

Police say the driver didn’t stop after hitting the girl on Sunday evening. The child was in her driveway near the curb on Exeter.

Her parents were outside watching her play, when she was hit. After the crash the family tried to rush their daughter to the hospital before quickly flagging down officers at 11th and Tibbs streets.

Police say the suspect sped away from the scene in a gray four-door sedan.

Giselle Quiroz later died at a hospital. The family says she died just shy of her second birthday.

Anyone with information on the suspect in this case is still asked to contact Crime Stoppers at 317-262-TIPS.