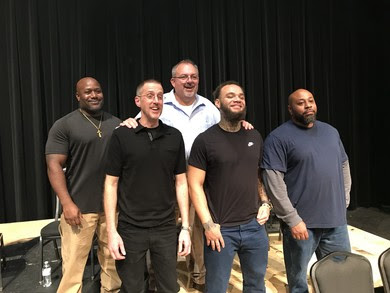 South Bend, Ind. – It wasn’t your typical night at the theatre and it certainly wasn’t your typical play being performed at the South Bend Civic Theatre the Monday evening of October 28th.  The play, Heartless, was written by offender Antrone Crockett, presently incarcerated at the Indiana Department of Correction (IDOC) South Bend Community Re-Entry Center (SBCRC).  Crockett also performed in the play with three other current SBCRC offenders: Deatron Lee, Elijah Suggs and John Applegate, along with former SBCRC offender Jamarcus Fields.

The play centered around a narrator giving a voice to a newborn baby ostensibly born heartless, yet living and breathing.  In fact, a metaphor that describes many offenders – both men and women – serving sentences at the IDOC and similar prisons across the nation for offenses many would consider being heartless.  In the span of just over one hour the play shares stories from each offender’s journey of what brought them to prison and how their actions had shattered lives of strangers and their own families.  The journey continues with each offender’s unique path of ultimately accepting the consequences of their actions – for their victims and themselves – yet coming to the realization the best path forward to redemption and forgiveness started with themselves and what they would do with their time in prison.

At the conclusion of the play, each of the men remained on stage for a question and answer session.  The audience, which numbered over 100 people, and included members from various motorcycle clubs, religious affiliations, Indiana Department of Correction personnel and citizens of the South Bend community.

The Warden of the SBCRC, Charles Bowen, commented, “This started as a community service project with the men volunteering to help the civic theatre build sets for recent play productions.” Bowen continued, “This evolved to the men watching plays and ultimately seeking permission to audition for a future play which some of the offenders successfully performed in before members of the South Bend community.” Bowen concluded, “The evolution continued with Antrone Crockett writing the Heartless play performed here this evening……it has been amazing to see what this has done for these men to be part of something productive and positive.”

What remains to be seen is what will transpire from the evening discussion held after the play.  While each of the men plan to continue their involvement with the South Bend Civic Theatre, all are wondering what will happen next?  Will there be another performance? If so, when and where?  Regardless of what happens next, each of these men knows they were part of something special that helped them on their journey to one day being a productive member of society and being able to find that redemption is possible.