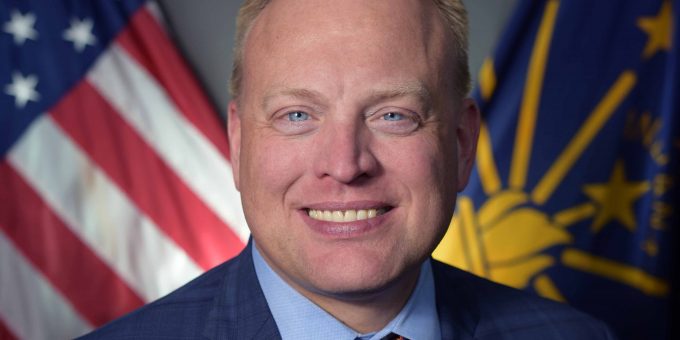 (INDIANAPOLIS) – Solicitor General Thomas M. Fisher on Friday was inducted into the American Academy of Appellate Lawyers — an organization that only accepts into its ranks “lawyers with a reputation for the highest excellence in appellate work and unblemished integrity,” to quote from Fisher’s letter of invitation.

“The average person might not be aware of what an honor this induction represents, but membership in this academy is limited to 500 lawyers in the United States,” Attorney General Curtis Hill said. “That averages to 10 lawyers per state. This group truly represents the best of the best when it comes to attorneys handling appeals cases.”

Fisher joined the Office of the Attorney General as Special Counsel in 2001 and became Indiana’s first Solicitor General in 2005. In this role, he handles many cases involving constitutional challenges and those with issues of vital interest to state government. In addition, he makes recommendations to the Attorney General on the state’s participation in filing amicus curiae briefs (friend of the court briefs) and regularly consults with the Appellate Division to determine which civil cases the state should appeal.

Fisher’s briefs have impact at the Supreme Court. Last year, in Currier v. Virginia, Justice Neil Gorsuch’s majority and plurality opinions several times cited an amicus brief that Fisher and his team filed on behalf of 20 states. The brief addressed how to apply the Double Jeopardy Clause where defendants agree to multiple trials for multiple charges arising from the same incident. This year, in another case supporting Virginia called Virginia Uranium, Inc. v. Warren, Justice Gorsuch’s majority opinion borrowed from Indiana’s 10-state amicus brief an illustration of how the court would have to rewrite a federal statute to rule the other way.

A decade ago, Fisher received national publicity when he defended Indiana’s Voter ID Law before the U.S. Supreme Court in Crawford v. Marion County Election Board. The attention generated by that case landed Fisher on such national news programs as “Lou Dobbs Tonight” and C-SPAN’s “Washington Journal.”

“Given the members of AAAL who are true legends in the law, I am deeply humbled by this honor,” Fisher said. “This award reflects the quality of the team we have assembled in the Office of Attorney General, and I am grateful to my teammates for working so hard to put the state’s best foot forward in every case. Above all, I am grateful to the attorneys general and citizens of Indiana who have afforded me so many opportunities to present challenging and interesting cases in our state and federal appellate courts.”