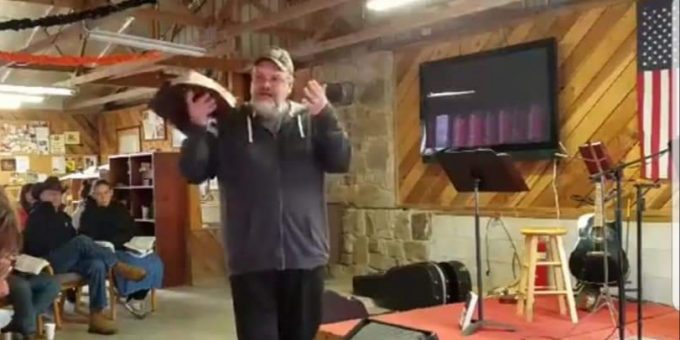 (BEDFORD) – This week WBIW will feature ways local individuals, churches, and groups of churches work outside the four walls of the church building.

Today, WBIW will focus on the Simple Church and Brim Ministries.

Billy Brim, his wife Shelley and son Karston work together outside the traditional walls of a church. In fact, in their Facebook posting they say, “the traditional church has lost its way. As followers of Jesus Christ, we must change our way of thinking. We must stop begging them to come to a building and begin praying the lost comes to Christ and for the backslidden to wake up before it’s too late.”

Billy and his wife Shelley were baptized at the same time at the age of 16, on a cold November day with ice on a pond.  Their spiritual journey began with them becoming members of the Donica Church of God.

Their ministry began with a nursing home ministry in 2001. They then pastored the “I Surrender All” ministry at the Country Palace owned by Ralph Eads. They were there for about four to five years before becoming the pastors at the Gullets Creek Baptist Church in Needmore and serving there for about eleven years.

After quitting the pastorate at the Gullets Creek Baptist Church, they started their current ministry praying around flag poles in the community.

“The Good News Tour has us going throughout the county praying for the communities we visited,” Brim said. “We have been to Popcorn, Peerless, Needmore, and Heltonville just to name a few of the places and pray for that particular community and give a short message. I just wanted to do something different from the traditional church, where there is no building, business meetings, and by-laws. “

The Brim family works together in their ministry, with Shelley mostly working behind the scenes doing Facebook posts and other things to support the ministry.

Their ministry, which is posted on Facebook, has people in several places including the Philippines, Texas and Oklahoma watching their sermons. Many have reached out and contacted them about their ministry.

The Facebook sermons allow the elderly and those who can not attend regular church services to hear the word of God.

The family has been invited to sing and share at other churches. Karston was invited to sing at the First Baptist Church during an Easter program last year, and Dive Christian Church invited him to play and sing during youth service.

“It is pretty fun to sing together, and perform some of my favorite songs like ‘Why Me Lord’ and ‘Three Wooden Crosses'” said Karston.

Karston is a gifted guitar player and began playing the drums at the age of five. He also plays the ukulele.

“We normally play the traditional hymnal music from church, and the older ones comment on how they enjoy listening to that, but we also play some of the more recent music occasionally,” he added.

Next week the Brims will be at the First Baptist Church in Campbellsburg at their homecoming services. But the Brims can usually be found on Facebook on Monday’s and Wednesdays at 7 p.m. They also play at the Hub Restaurant on the third Friday of the month at 7 p.m. and Midwest Trail Rides on Sundays at 9 a.m.