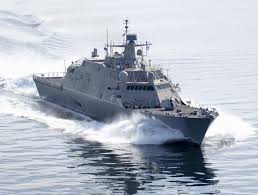 (BURNS HARBOR) — The Navy says it will commission its new USS Indianapolis combat vessel at a northwestern Indiana port Saturday.

The ceremony marking the ship’s entry into the Navy’s active fleet is set to begin at 10 a.m. CDT at Burns Harbor along Lake Michigan. It’s the fourth military vessel carrying the Indianapolis name.

The second USS Indianapolis was sunk by a Japanese submarine in July 1945 while returning from a Pacific island where it delivered key components for the Hiroshima atomic bomb. Only 317 of its nearly 1,200 crewmen survived the sinking and days in shark-infested waters.

The new ship was built at a Wisconsin shipyard and will be based near Jacksonville, Florida. It’s a Freedom-class littoral ship designed to be highly maneuverable for missions such as mine-clearing and anti-submarine warfare.