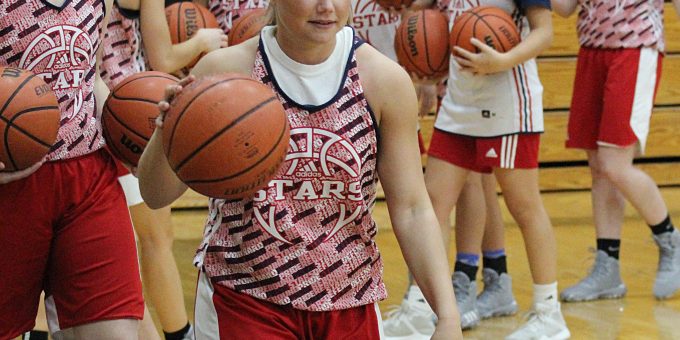 (BEDFORD) – Decisions, a former Walt Disney Company executive once stated, are not hard “when you know what your values are.” Bedford North Lawrence’s basketball values are etched in limestone.

That’s why, as the first marker for the 2019-20 season approaches, as the Stars prepare for their public debut in the annual intrasquad scrimmage on Tuesday evening, BNL coach Jeff Allen has only a few weighty conclusions remaining to make. He knows what he has.

The starting lineup is still not quite finalized, nor are the exact rotations. But Allen knows this: the Stars have talent, enough to go deep into the bench without much slippage. And he intends to use it.

BNL will be an interesting team to watch develop. Allen plans to press often, to run a lot, to maximize the strengths of team speed and experience. Anyone expecting the Stars to fall hard after the loss of Miss Basketball and six seniors from the roster better be ready to think again.

“I really believe, with this group, I’m going to play deeper than I ever have,” Allen said. “There will be some growing pains with that, but in the long run it will pay dividends. We want to play faster, pressure people a little more, because we feel we have some depth to do that.

“I expect a lot of kids to play and contribute.“

What does that mean? BNL basketball will never be a helter-skelter, shoes-on-fire, out-of-control unwatchable mess, like long hair on a windy day. But the Stars plan to attack with nonstop defensive tenacity, to unleash the transition game at every opportunity.

“We’re always be a team, if we can’t get an easy basket out of transition, we will be executing and running our stuff,” Allen said. “But we’d like to get out and run a little more, create some baskets off our defense.”

That slight shift plays to the games of guards, and BNL will be blessed with several. After senior center Madison Webb and senior reserve Peyton Sweet, few will be labeled a “forward.” Not if size is the prerequisite.

“We’re very guard heavy,” junior Irye Gomez said. “We have the ability to be very fast and get people where they don’t think we’ll be coming from. It’s very exciting.“

Depth will also mean minutes will be spread out. So the Stars will be able to push the throttle to the limit, knowing they can go 100 percent for a blast before another will be ready to step on the court.

“We all know when we’re out there, if we’re not doing well, we should be taken out and have someone else come in,” Gomez said. “It’s good we can go so deep. We have a lot of strengths.”

“All of us can play defense,” junior Jenna Louden said. “We’re fast and quick. We know what’s expected of us. We know everyone will give 100 percent.”

Don’t expect scrimmage perfection. But BNL, thanks to June scrimmages with Silver Creek and Evansville North, plus the extra allowed practice sessions this fall, is ahead of schedule.

“From the standpoint of us being prepared, I think the extra practices gives you an edge, gets you a little further along at this point,” Allen said. “ It’s hard to look good in intrasquad games because all the kids have been running the same offenses and defenses, and they know what to expect.

“There’s always decisions that will be made, when you play someone other than practice opponents. But the intrasquad stuff always helps.”

BNL will also visit Heritage Christian for the IHSAA-sanctioned scrimmage on Nov. 2 before the season opener at Mooresville on Nov. 8.