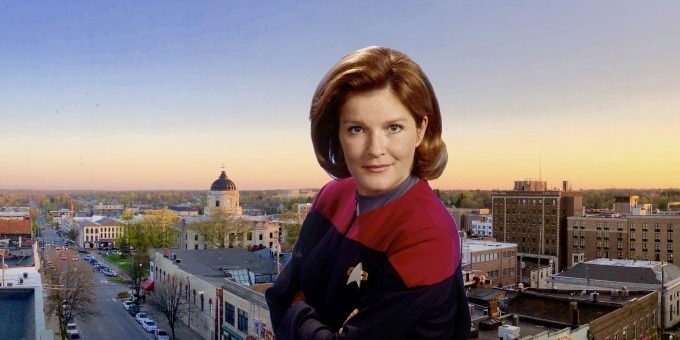 (BLOOMINGTON) – Bloomington residents will soon be able to recognize Captain Kathyrn Janeway of Star Trek: Voyager with a monument along the B-Line Trail if a new crowdfunding campaign reaches its goal to raise $12,500 by December 21st.

The campaign, led by creative nonprofit Artisan Alley with the permission of CBS Studios, is using the CreatINg Places program sponsored by the Indiana Housing and Community Development Authority (IHCDA).

If the campaign reaches its goal, the ‘Captian Janeway Bloomington’ project will receive a matching grant of $12,500 from IHCDA.

“Star Trek has entertained millions of people over the last several decades with their highly successful TV series franchise,” said Lt. Governor Suzanne Crouch who serves as board chair for IHCDA. “As the lead character for Star Trek: Voyager, Captain Kathryn Janeway regularly showed strength, bravery and a caring spirit. We are pleased to partner with Artisan Alley to recognize this empowering female leader while at the same time activate an area along the B-Line Trail.”

The funds raised will be used to create a monument, signage, and community engagement events.

“Captain Janeway consistently demonstrated integrity and humanity in the face of many challenges. She led her crew home without compromising her principals and became a role model to a generation of young women. Captain Janeway deserves to be recognized in Bloomington, the place of her future birth,” said Peter Kaczmarczyk, of the Captain Janeway Bloomington Collective.