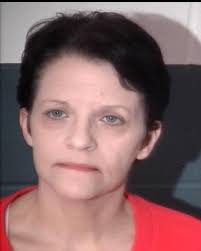 Sanders pleaded guilty to five theft charges and one count of neglect of a dependent. The official misconduct charge was dismissed.

She will be sentenced on November 14 at 9 am.

The Indiana State Nursing Board voted on Sept. 19 to extend the suspension of Sanders’ nursing license for at least another 90 days, stating the board may take additional action once the criminal case is concluded.

On Friday, March 8, Mitchell Police Department Resource Officer Rob German began an investigation in reference to a complaint of medication belonging to students that had gone missing.

On Tuesday, March 12, Officer German completed his investigation and forwarded his report to the Lawrence County Prosecutor. The following day the prosecutor’s office filed charges against Sanders. She was arrested on March 12th.

Police began their investigation after Sanders asked two secretaries at Burris Elementary to do a pill count after a report of missing medication. They determined the count was off. That is when Sanders admitted to knowing the count would be off and admitted to ingesting five pills (Amphetamines), from two Burris Elementary students, and seven pills from two students at Hatfield Elementary including 20 grams of “Methyphenidate” (Ritalin) and a 10 mg. tablet of Methyphenidate and 5 mg of “Dexmethylphenidate” (Focalin).

Sanders admitted to replacing one of the Hatfield Elementary student’s medication with 81 mg. of baby aspirin.

Sanders provided a written statement and admitted in that confession of stealing 12 pills. She immediately tendered her resignation with the Mitchell Community School system.

Sanders told police she stole the medication because she is an addict.