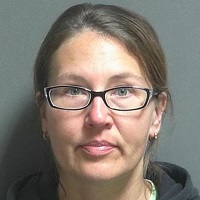 (SANDBORN) – A Sandborn woman was arrested after she was found passed out on her kitchen floor while caring for her three children.

The investigation began on Monday, September 30, when deputies were called to the home in Sandborn after a family member reported Cullison was passed out with her three children in the home

A family member went to the house after one of the children called a grandparent to come to pick them up. After the grandparent arrived, a call was made to the sheriff’s department. The caller reported, they found food cooking on the stove that had almost caught fire while Cullison was passed out.

When police entered the house, Cullison was lying on the floor in the kitchen and had all the signs of being intoxicated. She was belligerent and verbally abusive and police say her speech was severely slurred.

This was not the first time police had been called to the home. Deputies had responded to a similar situation in late July.

Cullison agreed to take a breath test and according to court documents had a blood-alcohol concentration of 0.188 on a portable breathalyzer.

The children were left in the care of adult family members. Cullison’s husband arrived home while police were there. Cullison was not arrested that night. The Department of Child Services was alerted.

A criminal case was filed against Cullison on Thursday, October 17, and a warrant was issued for her arrest. She was arrested on Friday, Oct. 18. Her bond was set at $4,000 surety with ten percent cash allowed. She posted $400 and has been released.