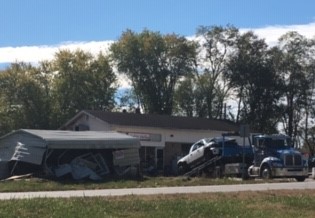 (SPRINGVILLE) – Three people were injured in a two-vehicle accident at the intersection of State Road 54 and Old Farm Road.

According to a Lawrence County Sheriff’s Department report, 36-year-old Arthuro Menchaca, of Springville, was traveling west on State Road 54 West and turned left to travel south on Old Farm Road in Springville.

As Menchaca was turning his 2007 Chevrolet Silverado was struck by a 2007 Dodge Ram pickup driven by 53-year-old Bridget Fretz, of Bedford.

Fretz was traveling east on State Road 54 at the time of the collision.

According to police, after the initial collision, the Menchaca’s truck spun around to the right and ran off the roadway into the parking lot of Rob’s Auto Repair. The auto repair shop is located on the southeast corner of the intersection of State Road 54 West and Old Farm Road.

After spinning around the truck collided with a parked 2001 Mercury Grand Marquis owned by Matthew Juhl. This collision caused the passenger car to travel east and collide with a 1994 Ford Explorer owed by Jeffery Dresnek, of Bedford

There was no one in either of the two vehicles parked in the lot.

Fretz told police she was traveling east on State Road 54 West, west of Old Farm Road and started down the hill when she noticed the pickup truck turn in front of her. She told police there was nothing she could do to avoid the collision.

After the collision, Fretz’s pickup ran off the south side of State Road 54 West and into Rob’s Auto Repair lot.

The truck then struck a large tractor-trailer tire which was laying on its side in the parking lot. This caused Fretz’s truck to go airborne and onto two wheels on the driver’s side. The pickup continued to travel east and crashed into a carport in the Rob’s Auto Repair lot. The truck stopped partially in this building.

Police say the truck traveled 155 feet from the point of impact with Menchaca’s truck until it stopped inside the carport.

Members of the IU Health Ambulance as well as members of the Perry Township Volunteer Fire Department were called to the scene.

Menchaca complained of chest pain. He was treated at the scene but refused to be transported to a local hospital

Fretz complained of head pain. Her passenger 35-year-old Austin Fretz suffered minor bleeding to the fingers on his left hand and complained of pain. Both were transported to IU Health Bedford Hospital for treatment.