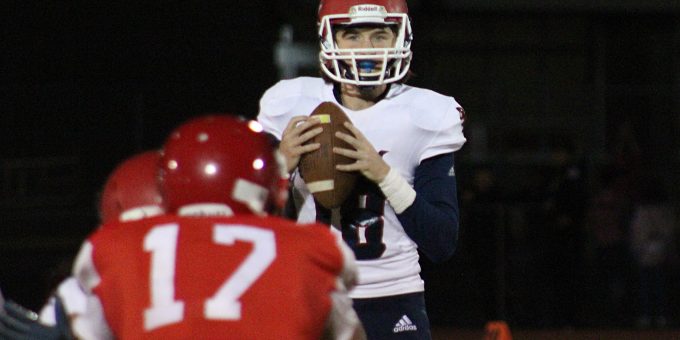 JEFFERSONVILLE – That obnoxious cannon fired, signifying a Jeffersonville score. But wait a minute, Bedford North Lawrence’s sideline was dancing – not the Devils – in the pale moonlight.

Guess who was correct? When Jeffersonville’s late field-goal attempt slid slightly wide right, fooling almost everyone except the official parked under the goal post, the Stars erupted with devilish glee, celebrating a most improbable and impressive comeback victory.

Down 20-0 early in the third quarter, BNL answered a halftime manhood challenge from its head coach with an amazing 23-20 triumph at Blair Field on Friday night. Dalton Nikirk threw a touchdown pass and slashed into the end zone for the go-ahead score as the Stars (3-6, 3-3 in the Hoosier Hills Conference) ended a three-game losing streak and ruined Jeffersonville’s Senior Night.

When Jeffersonville’s Isaac Findley crashed and dashed 81 yards with the opening kickoff of the second half, giving the Devils (3-6, 3-3) a three-score advantage, BNL looked dead. After a lifeless opening half, the Stars were already on life support. And Steve Weber snarled, spending the halftime asking whether the season had already ended.

Evidently, it had not. BNL responded with one of the gutsiest rallies in the Weber era – on the road, about to wrap up a regular season with nothing at stake. Except pride. And BNL had some.

“To me, it was a team that had laid down,” Weber said, still not smiling much after the outcome was secure. “I thought they were done playing football. If you lay down and quit, you are a quitter, a loser for life. And you can lose football games and still be a winner, you keep trying. So that was the response I was hoping to see.”

Here’s how the response unfolded:

After the shocking kickoff return, and another blast from that blasted cannon, BNL went to work following a Dylan Nikirk kick return, driving 51 yards. Two Jeff penalties (a theme to examine later) kept the march going, and Owen Beaver capped it with a 25-yard option blast. Nikirk’s two-point pass to Beaver put the deficit to 20-8.

The next series was the turning point. Twice, the Devils broke free for touchdowns – quarterback Shaun Wimberly escaping a sack and shoddy tackling to find Jadehn Debnam all alone in the secondary, and punter DeyDey Hughes squirming free for a 51-yard gallop. Both times, the plays were erased by penalties, part of the 12 flags for 120 yards against the Devils. Jeff coach Isaac Parker did not dispute either.

When the Stars finally got the football, they struck again, with Nikirk finding Derek Hutchens on a flash-and-go route (totally improvised, Hutchens later explained) for a 32-yard touchdown. Suddenly the margin was 20-16.

“It was an at-the-moment play,” Hutchens said. “He pumped faked and I just went. I knew I was gone.”

BNL’s third drive was the most impressive. It covered 86 yards, in 18 plays, included two fourth-down conversions. Those were a Beaver 3-yard scoot and a Nikirk-to-Hutchens clutch pass in the right flat. Two plays later, Nikirk bolted over from a yard, and BNL was in front.

“He made a great read, a great pass,” Weber said of Nikirk’s key red-zone plays. “And then to tuck it. In the past I’ve seen him wanting to pitch. He wanted the ball. Those two plays, that’s a mark of a decent quarterback.”

With 3:57 left, the Devils had time to answer. And they almost did. Wimberly hit two passes and raced 24 yards, moving the Devils into the red zone. But a sack by Austin Messmore changed the momentum, and Jeffersonville finally faced a 4th-and-5 from the 9 with 22 seconds left.

After two timeouts to ice the kicker, after Parker lined up to go for it, only to attempt to draw the Stars offside, Jeff’s Gafred Altamirano tried the 26-yarder. It leaked right. So blast that cannon all you want.

“We weren’t changing our mind,” Parker said of the fateful decision. “We didn’t like it going to come down to that. But we have nothing to lose at that point. It was off by about a foot. Bummer.”

Nikirk was 14-of-22 passing for 175 yards while Hutchens caught 7 balls for 93 yards. They seemed to take the challenge personally.

“He gave us a motivational speech, kind of pissed us off, I guess you could say,” Nikirk said. “We came out with a little fire in the second half.

“I knew we had it in us. The way we battled back was surprising. I hope we carry this momentum into the sectional.”

Findley had a huge night, rushing for 126 yards in addition to the kickoff return. Wimberly was 13-of-23 for 181 yards, with Gervasio Mitchell grabbing 7 for 111 yards and two touchdowns. He had both in the first half as the Devils rumbled to a 14-0 lead at intermission.

“I don’t know what those starts are all about,” Weber said. “I was worried. The two opposite halves was something. It’s hard for a team to pull themselves out of that. And they did. This ranks up there. It was a great comeback – especially after that kickoff. They could have flopped right there. They proved me wrong.”

Parker blamed the reversal on the flags.

“Penalties, that’s what changed,’ he said. “A lot of their drives were extended, a lot of our drives were cut short, by penalties.”

BNL will now enjoy a week off before returning to Floyd Central for the first round of the Class 5A sectional on Nov. 1.