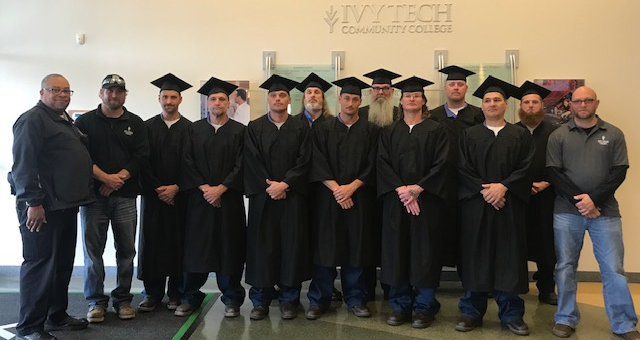 Welding Graduate James Baker gave a very inspirational speech about how the Ivy Tech faculty had treated the students with respect the same as they would have done with other students.  He said how that alone had helped them to believe that there are people in society that truly care about what happens to them.

CNC Graduate Harold Powers gave a sincere speech about how much he appreciated the opportunity that WVCF and Ivy Tech had given the students.  He said how they had provided a way for them to support themselves and their families, and how much that meant to them.

As a part of Gov. Holcomb’s Next Level Agenda , the program trains men at the Wabash Valley Correctional Facility how to operate a lathe with the ultimate goal of aligning them with gainful employment in the industry upon release. CNC is an exceptional pathway for released offenders, providing higher pay rates and stable employment upon re-entry. Currently Indiana’s correctional facilities house about 27,000 offenders—and more than 90 percent of them will eventually be released back into Hoosier communities.